Shakedown: Return of the Sontarans

You may be looking for Shakedown: Return of the Sontarans.

Shakedown is the forty-fifth Virgin New Adventures novel. It features the Seventh Doctor, Bernice Summerfield, Chris Cwej and Roz Forrester. This is the first novel to be a partial novelisation of a spin-off video drama; Shakedown: Return of the Sontarans, the action from the video drama takes place in the middle of this novel and does not feature the Doctor or any direct references to him. This is due to the unique licensing and copyright arrangements of spin-offs and the BBC at the time (it was possible for filmmakers to get permission to use characters created by specific writers, so long as the works did not feature BBC-owned properties such as the Doctor).

This was also Terrance Dicks' final contribution to the New Adventures series. However, he did write a partial sequel to this novel, Mean Streets, which is one of the Virgin Bernice Summerfield New Adventures.

"The Sontarans can never defeat us. It is we who will win."

For thousands of years the Sontaran clone-warriors and the Rutan gestalt have fought each other across the galaxy. Now the Sontarans have a plan to strike at the heart of the Rutan Empire, and utterly defeat the Rutan race.

The Doctor has his suspicions, but only one Rutan spy knows the Sontarans' secret. He is being pursued from planet to planet by Chris and Roz and by a Sontaran hit squad. After a confrontation aboard the racing space-yacht Tiger Moth, the chase culminates on the library planet Sentarion — where Professor Bernice Summerfield's researches into the history of the Sontaran/Rutan war turn into explosive reality.

Only one Rutan spy knows the Sontarans' plan. As he is chased through the galaxy in a desperate bid for his life, he reaches the planet Sentarion - where Professor Bernice Summerfield's research into the history of the Sontaran-Rutan war is turning into an explosive reality.

Kurt is a smuggler of Jekkerta weed on the planet Jekkar. Before he can take off from the planet, the Sontarans land, planning to invade the planet. Kurt is arrested and detained, to be shot at dawn. In his cell, he wakes to find a small man who names himself "Smith", also to be shot at dawn. However, Smith has been arrested for aiding a rebellion against the Sontarans. Sontaran Commander Steg briefs Kurt on his captivity before leaving the cell. Smith reveals to Kurt that he has been aiding the native species on Jekkar, the peaceful Jekkari, to fight back against the human colony. A Jekkari breaks down the cell door, prompting Smith (the Doctor) and Kurt to escape. They are spotted by a Sontaran trooper, who is killed by a second Jekkari. Kurt escapes Jekkar in his ship, and the Doctor stays with the Jekkari, who liberate the planet from the Sontarans, causing them to retreat.

Years later, Chris Cwej and Roz Forrester arrive in Megacity, capital of Megarra, looking for a serial killer that dissects its victims and takes their identities and money. Garshak, a mentally augmented and supremely intelligent Ogron, brings them in for questioning as the head of police but releases them to continue their investigation, as the killer could well target the crime lords of the corrupt city. Gorsk, a Sontaran intelligence officer, identifies Chris and Roz in a hit on the police station, and marks them for death. The two Adjudicators track the “Ripper” to a nightclub, but cannot prevent it from killing and dissecting the nightclub’s owner, although they do manage to interrupt it before it can take on the identity of the victim, and wound the killer when it attempts to escape. A pack of Wolverine assassins hired by Gorsk ambush Chris and Roz as they chase the killer, but Garshak and his force save them in the nick of time. By this point, The Ripper has already left the planet for Space Station Alpha under his old identity, but Chris and Roz are persuaded to follow. Gorsk reports to Sontaran High Command on their battle station, the War Wheel and kills the Wolverine leader for his failure. Gorsk is then slaughtered by the remaining Wolverines out of revenge.

While this has been happening, the Doctor sends Bernice Summerfield to the university on the desert planet Sentarion to research the Sontaran/Rutan conflict. Upon her arrival, she is targeted and almost murdered by a Harrubtii assassin- religious fanatics on Sentarion. 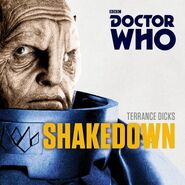