Shada by Gareth Roberts was a novelisation of the TV story of the same name written by Douglas Adams, which was intended to conclude Season 17 but never completed due to labour action at the BBC disrupting production. It was the first novelisation of a Doctor Who TV story since Doctor Who - The Novel of the Film in 1996, although many Sarah Jane Adventures novelisations were published between the two.

At the age of five, Skagra decided emphatically that God did not exist. This revelation tends to make most people in the universe who have it react in one of two ways — with relief or with despair. Only Skagra responded to it by thinking, Wait a second. That means there's a situation vacant.

From the unique mind of Douglas Adams, the legendary "lost" Doctor Who story completed at last!

The Doctor's old friend and fellow Time Lord Professor Chronotis has retired to Cambridge University — where nobody will notice if he lives for centuries. But now he needs help from the Doctor, Romana and K9. When he left Gallifrey he took with him a few little souvenirs — most of them are harmless. But one of them is extremely dangerous.

The Worshipful and Ancient Law of Gallifrey isn't a book for Time Tots. It is one of the Artefacts, dating from the dark days of Rassilon. It must not be allowed to fall into the wrong hands. The sinister Skagra most definitely has the wrong hands. He wants the book. He wants to discover the truth behind Shada. And he wants the Doctor's mind...

Based on the scripts for the original television series by the legendary Douglas Adams, Shada retells an adventure that never made it to the screen.

This epic "lost" adventure from 1979 features the Fourth Doctor and Romana as played by Tom Baker and Lalla Ward, written by Doctor Who's then script editor Douglas Adams.

Inside this book is another book — the strangest, most important and most dangerous book in the entire universe.

The Worshipful and Ancient Law of Gallifrey is one of the artefacts, dating from dark days of Rassilon. It wields enormous power, and it must not be allowed to fall into the wrong hands.

Skagra — who believes he should be God and permits himself only two smiles per day — most definitely has the wrong hands.

Deviations from the televised story[]

This novel was released as an audiobook on 15 March 2012 complete and unabridged by BBC Audio and read by Lalla Ward with K9's voice by John Leeson. Unusually, this release uses the series' theme music at the opening and closing, a convention usually not followed in these audiobook releases. 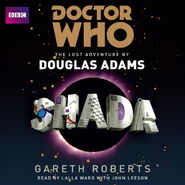