It consisted of a single, five-episode story arc entitled Torchwood: Children of Earth, broadcast over five consecutive nights. The series had a new producer, Peter Bennett, and was directed by Euros Lyn, who had considerable experience on the revived Doctor Who.

The first and final episodes were written by Russell T Davies, who also wrote the story arc. The third episode was co-written by Davies and James Moran whilst the second and fourth were by newcomer John Fay, though, according to Moran's blog, all three writers had an input into the storyline. 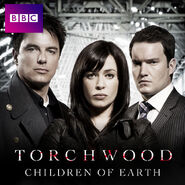