The second series in the Torchwood range of audios was released by Big Finish Productions in 2016. It followed after Series 1 without a break and continued both its format with each story concentrating on a particular Torchwood personality and the loose arc revolving around the Committee. In addition to the characters already featured in Season 1, this season saw the return of Naoko Mori and Indira Varma to their characters of Toshiko Sato and Suzie Costello respectively. Andy Davidson, though strictly speaking not a member of Torchwood, was given his own story, which also debuted the mysterious character of Norton Folgate played by Samuel Barnett. Queen Victoria played a major role in the opening story of the season, though voiced by Rowena Cooper rather than Pauline Collins, who founded the Torchwood Institute onscreen.

Following the success of the first series, the same loose formula was applied here. The Committee arc continued, but without obligating individual stories to be part of it: sometimes the Committee was hinted at as an enabler behind the villain-of-the-month and sometimes it was not mentioned at all. Only Zone 10 and Ghost Mission (stories 2 and 3 respectively) truly contributed to the development of the arc. Not surprisingly, they were also the stories to introduce and reintroduce elements of Torchwood universe that continued beyond the season.

Zone 10 saw the first appearance of Toshiko Sato played by Naoko Mori at Big Finish and brought back the bad penny, first seen in the 2nd-season television story Fragments. In addition, David Llewellyn, the writer of Zone 10, brought with him the KVI, the Russian equivalent of Torchwood Institute from his earlier stories Trace Memory and Fallout published elsewhere.

Ghost Mission made an unusual decision to feature none of the known Torchwood members. Instead, its main protagonist was Andy Davidson, implausibly paired with a never before seen Torchwood member from 1950s by the name of Norton Folgate played by Samuel Barnett.

Norton, the KVI and the bad penny all later played a role in the special 10th anniversary story The Torchwood Archive, with Norton's back story and relationship with Jack further elaborated in Outbreak, the first-announced but second-released special from the interregnum between the second and third series.

Further structural similarities included the opening Jack Harkness story, the Gwen Cooper season finale and the directorial prevalence of Scott Handcock. Many writers continued receiving small cameos, though not necessarily in their own stories.

Taking advantage of the absence of a straight narrative line, the remaining four stories were set in the past, future or present of Torchwood's main television timeline. The Victorian Age (story 1) gave a rare glimpse into the early days of Torchwood, pairing Jack Harkness with the institute's founder her royal self. The story also introduced another Torchwood personality, Archie, who was only mentioned earlier in the novel The Twilight Streets.

Moving Target (story 4) served as a stand-alone story for Suzie Costello played by Indira Varma. It was very loosely tied to the Committee arc and set before the events of television series 1.

Made You Look (story 6) was another Gwen-rebuilding-Torchwood-all-on-her-own story at the end of the season.

But Broken (story 5) has broken still new narrative ground. Not only was it chronologically set inside the first television series, but it was fully integrated in it. On the TV screen, Ianto's hate for Jack on account of him killing Lisa Hallett in Cyberwoman turned into an affection and steamy affair without any explanation. In Broken, Joseph Lidster took aim at this apparent psychological gap. The story's events are intertwined with the three television stories following Cyberwoman, with both Countrycide and Greeks Bearing Gifts playing significant narrative role in Broken.

No more was the audio continuity contemporaneous but largely independent from the television one. Nor was the connection merely by way of fleshing out a throwaway onscreen line, like, say, Quinnis expounding on an adventure hinted at in The Edge of Destruction. This story has identified and explained a serious character-development transition in the original TV show. Indeed, Lidster wrote Broken as the TV show's "Episode 7A", even masking some information only revealed in "later" television episodes.

The stories were released monthly from March till August 2016.

On 11 September 2015, hot on the heels of the first release of Series 1 the day before, Series 2 comprising further six stories was announced to start in March 2016 to continue an unbroken run from Series 1.[1] At this point, the first draft of the script for the first story was already completed.[1]

On 3 December 2015, it became known that, like the first season, the second one would begin with a Jack Harkness story.[2]

The return of Naoko Mori as Toshiko Sato in the second story of the season, Zone 10 was announced on 16 January 2016 at "Big Finish Day 8". In addition, it was revealed that the first story would be called The Victorian Age, be set in the Victorian era and feature Queen Victoria herself, played by Rowena Cooper. Finally, it was hinted that Andy Davidson will return for a full scale adventure. [3]

More details of The Victorian Age were announced on 2 February, including the participation of Louise Jameson, better known as the Fourth Doctor companion Leela.[4]

On 14 February, the return of Suzie Costello played by Indira Varma was announced at Gallifrey One 27. She would star in the fourth story of the season, Moving Target. It was also revealed that the third story, Ghost Mission, would focus on Andy Davidson, who would be pared with an enigmatic new character of Norton Folgate played by Samuel Barnett.[5] The idea of this duo was borne out of their collaboration on the novel adaptation Nightshade.[6]

The title of the penultimate story of the series was unveiled on 9 April. Broken would star both John Barrowman and Gareth David-Lloyd as Jack Harkness and Ianto Jones and explore how their relationship evolved during the first series of the televised Torchwood. The idea to expand on their relationship originated from the story's writer Joseph Lidster.[7]

25 May saw the first announcement of a special release, Outbreak, in the Torchwood range. The side effect of this big production was that Series 2 was not immediately followed by the next season.[8]

Finally, on 4 June, the title of the last story of Series 2, Made You Look focusing on Gwen Cooper was announced.[9] The story was recorded on 6 May 2016.

Unlike the first series, Series 2 was tightly directed by just one man, Scott Handcock.

June 2016 marks one of the first instances when the designations "Series 1" and "Series 2" began being phased out in favour of more descriptive terms such as "second run".[10] In particular, when the next 6-story batch was finally announced on 7 September, more than a month after the release of the last story of Series 2, it was not referred to as "Series 3". The first story of this new batch was scheduled for March 2017 release,[11] marking a 6-month hiatus in the regular Torchwood releases. The resulting Torchwood void was filled with three special releases. 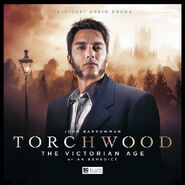 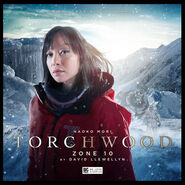 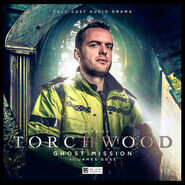 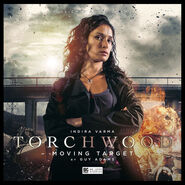 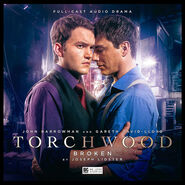 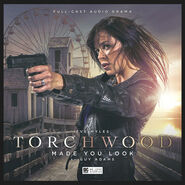