Series 1 of Torchwood ran between 22 October 2006 and 1 January 2007. It starred John Barrowman as Jack Harkness, Eve Myles as Gwen Cooper, Burn Gorman as Owen Harper, Naoko Mori as Toshiko Sato, Indira Varma as Suzie Costello (only star credited for the pilot episode), and Gareth David-Lloyd as Ianto Jones. The series opened with Everything Changes and concluded with End of Days.

It consisted of thirteen stories and episodes. The series saw the introduction of Torchwood Three and its respective team. It ties into series 1, 2, and 3 of Doctor Who, with references to the Bad Wolf meme and Harold Saxon, as well as the presence of the severed hand which once belonged to the Tenth Doctor, and the emblem of the Preachers briefly appearing among graffiti. Most of the stories are contemporary, but the series delves into flashbacks and the occasional time travel adventures centred mainly around Captain Jack Harkness.

Indira Varma's character, Suzie Costello, was noteworthy for being billed as a main character in a ruse to deceive audiences into thinking she would be integral to the team and the series itself, only for writers to blindside the viewers with her sudden death and set the more dangerous atmosphere and tone Torchwood exhibited than Doctor Who.

Torchwood also took full advantage of its post-watershed time slot, establishing a much grittier and adult nature than its parent series with the use of material which would be unsuitable or otherwise immoral for younger viewers and not intended to be perceived as family-friendly. These attributes include intense sexual elements, strong profane language, heavily pessimistic themes, and gratuitous violence. Later series would somewhat downplay these controversial elements.

Starting with the second story of the first series, every episode opened up with an introductory sequence featuring an opening narration by Jack Harkness: "Outside the Government, beyond the police. Tracking down alien life on Earth, arming the human race against the future. The 21st century is when everything changes, and you've got to be ready."

The 12th October 2016 marked the 10th Anniversary of Torchwood. In celebration of that, and due to its popularity, cast and crew were invited to the Chapter Arts Centre in Cardiff, and a special screening of the very first ever episode was shown.[1]

Series 1 of Torchwood is available for purchase and/or as part of a subscription on: 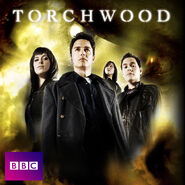