Key documentaries about the season:

Series 1 of Class ran between 22 October 2016 and 3 December 2016. It starred Katherine Kelly as Miss Quill, Greg Austin as Charlie Smith, Sophie Hopkins as April MacLean, Fady Elsayed as Ram Singh , Vivian Oparah as Tanya Adeola and Jordan Renzo as Matteusz Andrzejewski. Peter Capaldi also guest starred as the Twelfth Doctor in the first episode. The series opened with For Tonight We Might Die and concluded with The Lost.

It consisted of seven stories and eight episodes. Class was created by Patrick Ness, who previously wrote the tie-in short story, Tip of the Tongue, for the fiftieth anniversary of Doctor Who. Ness revealed there would be "no Clara" and that Class would "definitely air in America".[1] In an interview with Entertainment Weekly, Ness said he has been asked to bring various parts of Doctor Who back since the series was announced, but he wants to create something new. He also confirmed the Weeping Angels would not feature in the series.[2] However, a Weeping Angel made an appearance on the last episode of the series.

The series was streamed on BBC Three in 2016 and later aired on BBC One in 2017. This was the fifth Doctor Who television spinoff after K9 and Company, Torchwood, The Sarah Jane Adventures, and K9 and the first spinoff to premiere online rather than on a traditional television channel.

The first episode was shown at the Class World Premiere in Shoreditch in London on 20 October 2016.[3]

Class was first uploaded to BBC Three's streaming service on 22 October 2016, with its first two episodes, exactly 10 years after the airdate of Torchwood's first two episodes, Everything Changes and Day One. A BBC One airing followed in the United Kingdom in January 2017.

The series began filming on 4 April 2016 and wrapped on 2 September 2016. The three first episodes in the series were directed by Ed Bazalgette, who directed the Doctor Who episodes The Girl Who Died and The Woman Who Lived. Philippa Langdale and Wayne Che Yip directed two episodes each, whilst Julian Holmes directed the finale.

Blair Mowat composed the score for the series.

The working title of the first episode of the series was The Prom.[4]

Future of the show Edit

On 7 September 2017, Radio Times spoke to BBC3 controller Damian Kavanagh about a future return of Class, in which Kavanagh said: "No, no. There was nothing wrong with it, I thought Patrick [Ness] did a great job, he explored an amazing world. In honesty it didn’t really land for us on BBC3; some shows don’t and I have to make decisions about what we’re going to do from a drama point of view, and what we did after Class was Clique, which worked really well for us."[5]

Simultaneously with more traditional channels of distribution, series 1 of Class was made available for purchase on several online streaming platforms, in some countries outside the initial broadcast range. Generally, the episodes were made available online on the same day they were premiered on BBC Three. Series 1 was available on:

The release of Series 1 in US digital stores was postponed until BBC America broadcasted the show in 2017. 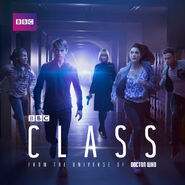 Stories set during this series Edit

Retrieved from "https://tardis.fandom.com/wiki/Series_1_(Class)?oldid=2846429"
Community content is available under CC-BY-SA unless otherwise noted.