You may wish to consult Series 1 for other, similarly-named pages.

The first series in the Torchwood range of audios was released by Big Finish Productions in 2015–2016 and marked the first audios produced by Big Finish under the extended license including the BBC Wales-produced television series. The audio series served as a continuation and extension of the Torchwood television series and saw several actors from it reprise their roles as members of Torchwood Three, with one story concentrating instead on the head of Torchwood One from the two-part season finale of the second series of Doctor Who. Both television series were under the creative lead of Russell T Davies, who was consulted on the audios. The season included six releases, each focusing on one member of Torchwood.

The idea to continue Torchwood stories on audio with Big Finish has been around at least since 2013, when, having been given a green light by BBC Worldwide, the television series' executive producers Russell T Davies and Julie Gardner began thinking with Big Finish's Gary Russell about the future of Torchwood in Cardiff after Miracle Day. The development of this audio Series 5, however, had to be postponed till 2017, partly due to Gary Russell moving to Australia.

In the meantime, he and Scott Handcock decided to settle on a less ambitious project of telling stories set within the four seasons of the television series. The format would have to be somewhere in between full-cast audios and companion-crhonicles-style heavily narrated two-handers. The role of the producer fell on James Goss.

It was further decided that each episode would focus on one Torchwood operative.[1] The six episodes of the first series thus revolve around Jack Harkness, Ianto Jones, the duo of Gwen Cooper and Rhys Williams, Yvonne Hartman, again Jack and again Gwen respectively. The series also featured an on-going arc of Torchwood fighting against the Committee, the organisation introduced in the first story The Conspiracy.

Notably, the stories did not form a chronological progression. The Conspiracy, Fall to Earth and Uncanny Valley (stories 1, 2 and 5) were indeed set within the timeline of the television series. Forgotten Lives and More Than This (stories 3 and 6) explored Gwen's life after the Miracle Day, respectively post-Torchwood and then trying to put Torchwood together again. Finally, One Rule (story 4) was a bit of an outlier, having the head of Torchwood One front and centre, albeit quite out of her element in the middle of Cardiff. The idea of bringing Yvonne to Cardiff instead of observing her at the height of her carrier originated from Matt Nicholls of BBC Worldwide.[2] To fulfil the promise of a chamber cast, various plot devices have been used. For instance, despite Yvonne visiting Cardiff during the golden years of Torchwood Three, Tracy Ann Oberman did not interact with any Torchwood Three actors because Yvonne temporarily froze them in the Hub, purportedly to keep them from interfering in her business.

Music for the series was composed by Blair Mowat. In particular, relying on the original theme by Murray Gold, Mowat created a new theme for the series.[3]

The stories were released monthly from September 2015 till February 2016.

Despite being in the works at least from 2013, the series was first announced to the public in John Barrowman's Magic FM radio show only on 3 May 2015,[5] after the recording of the first story The Conspiracy was completed on 30 April. To accommodate John Barrowman's busy filming schedule, he was given an opportunity to record from the United States whereas the rest of the cast were based in the UK. Big Finish Productions provided more details on their website the same day, 3 May.[6] By their own admission, the interest to this announcement briefly crashed the Big Finish website.[7] The first story was written by David Llewellyn. His initial drafts for the story from 2014 featured a more decisive resolution in the end. In the final form, the problem of the Committee was left open-ended, thus, supplying the arc for Series 1 and beyond.[1]

According to the initial release schedule, The Conspiracy was to be out in September 2015, whereas the remaining five stories would follow monthly starting from January 2016.[6]

On 16 July 2015, it was announced that Gareth David-Lloyd would reprise his role of Ianto Jones in the second story Fall to Earth of the series. At the same time, the release of stories 2–6 was moved forward, allowing for a continuous monthly schedule for the whole series beginning in September 2015.[8]

On 20 August 2015, the fifth story Uncanny Valley with John Barrowman was recorded without much fanfare. It would not be announced until "Big Finish Day 7" almost a month later.

Shortly before the release of the first story, on 8 September 2015, it was announced that Eve Myles and Kai Owen will reprise their roles as Gwen Cooper and her husband Rhys Williams in the third story Forgotten Lives.[9]

The release of The Conspiracy on 10 September was followed the next day by the announcement of Series 2 comprising further six stories.[10]

On 17 September, the main character of the fourth story One Rule was revealed to be Yvonne Hartman from the Series 2 two-part finale Army of Ghosts/Doomsday of Doctor Who played again by Tracy Ann Oberman.[2] Coincidentally, this story was recorded the same day the range was renewed for the new series.

During a panel at "Big Finish Day 7" on 19 September, the last two titles of the series were unveiled. John Barrowman as Jack Harkness would return in another Llewllyn story Uncanny Valley, followed by More Than This centred around Gwen Cooper.[11]

On 3 December 2015, the preview of More Than This teased a future cameo of an unnamed "Torchwood legend", who lobbied the production team to make an appearance in Torchwood.[12]

Matt Nicholls, who oversaw the production from the BBC Worldwide side and lived in Cardiff himself, was also responsible for the idea of More Than This, which sees Gwen Cooper trying to persuade a local councilman to authorise a new Torchwood base in Cardiff.[13]

According to James Goss, the range was initially budgeted as enhanced audiobooks rather than full cast dramas. However, despite a smaller cast than regular Big Finish audios, the stories could faithfully be described as full cast. The elements of narration present in the first story, The Conspiracy, were quickly retired.[14] 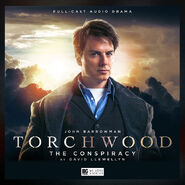 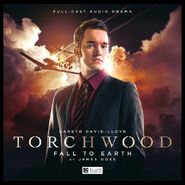 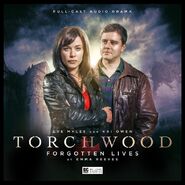 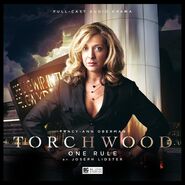 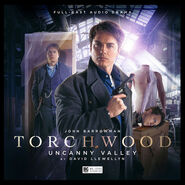 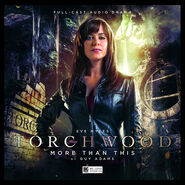