You may be looking for the character.

Scratchman was a novelisation of the unproduced movie Doctor Who Meets Scratchman, based on a treatment originally written by Tom Baker and Ian Marter.

Though Baker was the credited author, the novel was ghost-written by James Goss, with Baker acting as consultant.[1] Baker initially planned this story with Marter during his first season playing the Fourth Doctor.

The book posed itself as an account written by the Doctor of his trial on Gallifrey, with the deposition told to the Time Lord court during the trial serving as the main story.

The Doctor, Harry and Sarah Jane Smith arrive at a remote Scottish island, when their holiday is cut short by the appearance of strange creatures — hideous scarecrows, who are preying on the local population. The islanders are living in fear, and the Doctor vows to save them all. But it doesn't go to plan — the time travellers have fallen into a trap, and Scratchman is coming for them.

With the fate of the universe hanging in the balance, the Doctor must battle an ancient force from another dimension, one who claims to be the Devil. Scratchman wants to know what the Doctor is most afraid of. And the Doctor’s worst nightmares are coming out to play...

Missing interspersing scenes of the Doctor's trial on Gallifrey

Book One: The Long Night[]

Brought before the Time Lords on trial once more, the Doctor is accused of interfering in universal affairs. Offered a chance to explain his action before his execution, the Doctor begins to show the Time Lords the meaning of fear.

The TARDIS lands on an island off the coast of Scotland, where the Doctor, Sarah and Harry set up a picnic, and play rounders on the beach. When the Doctor goes to retrieve the ball, he finds it held by a scarecrow. He goes back to his companions but the scarecrow vanishes.

On the way back to the TARDIS, the picnic is found in ruins. The trio follow the trail back to a farm, but the farmer is too frightened and hostile to answer their questions. Harry knocks him out when he threatens the Doctor. They investigate his barn, but as they do, living scarecrows grab the farmer and force-feed him some powder, turning him into a scarecrow as well.

The scarecrows grow in number and invade the village. The Doctor rallies the survivors into a church and they barricade the main entrance. They discover that taking the clothes off the scarecrows causes the rest of the form to unravel and the Doctor hatches a plan. He begins constructing a machine to accelerate the lifespan and modify the behaviour of moths, causing them to attack the scarecrows' garments.

Sarah and Harry sneak back into the village to find a few resources the Doctor needs. As Harry collects sugar, Sarah is pursued through the TARDIS by one of the scarecrows. In the Jigsaw Room, Sarah confuses the scarecrow by showing her glimpses of her past life, and finally loses her when the scarecrow falls into the TARDIS mechanisms.

The Doctor's companions return just too late. Mavis Tulloch denounces the Doctor as a fraud and wrecks his machine. The Doctor surrenders himself as the scarecrows break into the church but they convert all the villagers anyway, including the Doctor's friend, Sophonisba Mowat. Sarah and Harry, however, discover the machine worked and the moths are let loose on the scarecrows, all of which unravel, but none of the villagers have survived.

At the latest development, the Cybermen emerge from the sea. The Doctor confronts the Cyber-Leader and learns that scarecrows were part of a Cyberman experiment, in which they utilised a plague gifted to them by another being. The Cyberman depart as their mysterious benefactor watches from a distance. The Doctor sees him but Sarah and Harry suddenly turn into scarecrows themselves, having been infected earlier. The Doctor escaped to the TARDIS to track down the distant figure, and hopes to save his companions as well.

The TARDIS lands in a volcanic landscape and is consumed and destroyed from the inside out by thorns and briars. The Doctor wanders the hellish landscape before he eventually is picked up by a taxi driver named Charon. In Charon's presence, the Doctor's memories begin to fade. They cross a chasm filled with desperate creatures called Sallows, souls no longer needed by the lord of the domain. As they continue on their jounrney, the re-appearance of the Cyber-Leader launches the Doctor into action and he remembers what his mission is. He and Charon narrowly escape and arrive at a seemingly empty location. The Doctor then notices a castle in the sky, and makes his way into it via a drawbridge. He is greeted by a lizard named Mr Tembel, who is supposed to torture him but lacks the energy and motivation to do so. Trapped in his chair via a stasis field, the Doctor begins to fall under the mysterious influence, but tricks Mr Tembel into allowing him to leave. He stumbles into a ballroom where all the guests ignore him, realising the experience was meant to bother him. The Doctor begins to feel lost and unimportant, and begins to turn into an insect-like sallow. Suddenly he meets a blond northern woman, whose cheeriness distracts him and returns him to his normal form.

With his morale restored, the Doctor is invited to a meeting with Scratchman, "Scratch" for short, a being believed by some to be the Devil, and this is his domain, also known as Hell. Scratch offers the Doctor a deal: he will return him to his home and help to foster a better universe. Somewhat tempted, the Doctor realises that this is another test, like those before designed to sap his will. Putting together the pieces, the Doctor surmises that Scratch offered the plague to the Cybermen, which allowed him to establish a foothold in the Doctor's dimension. If another deal is struck with the Doctor, Scratch will be free to make the universe his own. The two are at cross-purposes, so without a deal, the only alternative is for them to fight.

Somewhat unbeknownst to the Doctor, the challenge begins when he is reunited with Sarah and Harry inside two cages. The Doctor tells them to free themselves using will and imagination. However, Scratch taps into Harry's imagination and the landscape forms into a giant pinball table as well as a battleground for huge chess pieces. The trio realise that the only way to fight back is to stop Scratch from getting the high score and they are able to form some barricades which lead the pinballs into holes in the table. Harry falls down one of them but lands on a ledge.

Using his penknife, Harry makes his way into a hatch, where a crowd of beetle-like Sallows intentionally plunge to their doom. One explains to him they are sacrificing their souls to power the engines of Scratchman's castle, to keep it in the air. A crab-like guard interrogates Harry as to why he has his human form. Using his wit, he tells the guard Scratchman gave him back his human form and that all the workers were to be freed. Refusing to question the word of their master, the lost souls stop committing suicide and the castle's engines fail.

In a bid to confront Scratch again, the Doctor and Sarah make their way up the plummeting castle but Scratch escapes as it crashes to the ground. The Doctor ends up dangling above a pool of lava but he is rescued by Sarah and the Cyber-Leader, hauled to safety by his scarf. The Cyber-Leader, having also rescued Harry, is being forced to carry out good deeds by Scratch's reawakening of some of its memories and emotions. The Doctor tries to convince the Cyber-Leader to help them take down Scratch but it just silently leaves.

Scratch makes all remaining efforts to stop the Doctor. He summons apparitions of the dead islanders, including Sophonisba, to evoke feelings of overpowering guilt, but the Doctor accepts that their deaths are on Scratch's hands and not his. The islanders agree to help the Doctor face Scratch's next challenge: wicker facsimiles of the Doctor's old foes including huge spiders, a giant robot and oversized maggots, as well as versions of his first, second and third incarnations.

Harry, Sarah and the islanders help the Doctor break back in to Scratch's office and then prepare to fend off the army. In their final standoff, Scratch wants to know what the Doctor is afraid of, and the Doctor shows him. Unprepared for the revelation, Scratch himself is overcome with fear, which only worsens as more and more of the Doctor's foes materialise. Terrorised by the likes of the Morpho, the Daleks and countless others, Scratch dives into a chasm, with all the phantoms following him. Any remaining copies fade away as a calm descends over hell. The Cyber-Leader rescues Harry in one last good deed. Reunited with the TARDIS, the travellers go home.

The trial on Gallifrey reaches its climax. Though the Time Lords are unamused or worse by the Doctor's tale, the Doctor reminds them that he saved the universe and closed the breach leading to Scratchman's domain. Continuing his lesson in fear, he accuses the Time Lords of being afraid of change. He urges them not to sit idle the next time the universe is under threat. Satisfied that all has been said, he leaves. The Time Lords are outraged and demand he return, but they make no other attempt to stop him, and the Doctor has somewhere better to be.

The Doctor, Sarah and Harry have another picnic and another game of rounders, although the Doctor makes sure to remember the dead. He is approached by the Thirteenth Doctor after their brief meeting in Hell. Together, they contemplate their own past and future.

Much later, Sarah asks the Doctor about the Jigsaw Room. The Doctor explains the device was a Time Lord invention created to forecast probable futures and he had intended for the room to stay locked. Sarah understands he is mostly worried about the machine revealing his own future; he doesn't like to skip ahead. Afterwards, he tells Sarah if the jigsaw impressed her, she should see his train set...

James Goss explained the novel's development and writing to DWM in February, 2019.

"At the start of the project I sat down with Tom and a storyline, working through what a revisited version of the Scratchman story would be… We went right back to the original story and built it up from there.

Tom was very influential in shaping the story. We pitched it to him as "Doctor Who meets The Wicker Man" and he went for that. He came up with the idea of the story being narrated by The Doctor himself, which was thrilling… Tom also suggested the idea of The Doctor telling the story to the Time Lords… The cameos by the first three Doctors were suggested by my editor, Steve Cole.

We worked closely with Tom to make sure we’d got the tone of [The Doctor, Sarah-Jane and Harry’s] relationship right.

He’s been so very kind, and so gently encouraging, and so genuinely enthusiastic… I really hope I’ve done him and his Doctor justice."James Goss [src] 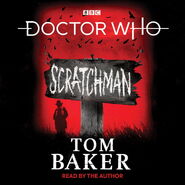