watch 01:50
Wiki Targeted (Entertainment)
Do you like this video?
Play Sound

Future Publishing Limited
This was the 24th release in SFX's regular series of Special Edition Collections – subtitled on the spine ‘Doctor Who: Your Ultimate Guide to all 10 Doctors!

What to expect when the Doctor returns to our screens

“Oh no, I’ve wet myself!” Precious Who memories …

Never miss an issue of SFX

Exploring a Time Lord’s back pages

The original Doctor laid down the template for those who followed

The Doctor’s mid-60’s companion on fame, TV violence and … gardening

The most urban man ever to helm the TARDIS

“I was thinking about your husband’s codpiece this morning …”

Young Parisians: recalling the making of a Tom Baker-era classic.

It shouldn’t happen to a vet, having to follow Tom Baker and al …

Meet the man who was Davros, creator of the dastardly Daleks.

The Doctor saddled with the worst costume ever …

The Doctor becomes a sometimes sinister manipulator of people. Really

The action-man star of the ill-fated US movie.

The making of the first 'toon Who', with Richard E. Grant

Our time travelling friend from the north

Behind the scenes for the return of Who

Dig the new breed. Doctor Who as a young charmer

Let there be Cybermen! The Who producer on season two

Rose’s mum on the reinvention of Jackie

Does ‘classic’ Who still cut the mustard?

Doctor Who goes big-screen in the mid-60’s

The hidden history of the pepperpot meanies.

An exclusive extract from top new book, The Science of Doctor Who

Rubbish Who monsters, a celebration

It’s not just the Doc who travels in the fourth dimension, y’know …

Sooo ‘80’s but we love it. The making of Robert Zemeckis’s classic

Take a look at the law man …

Your Who questions answered by those old enough to know better

Who-themed lists for your delectation

The official online website of the magazine with latests news 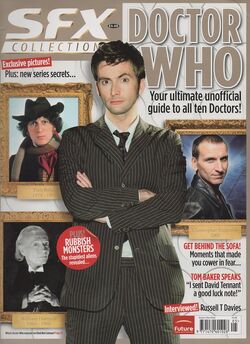