As she begins a desperate mission to find the one person who can make a difference, Rose discovers that it's not only her universe at stake. Across alternate dimensions, parallel timelines – where divergences may be tiny or cataclysmic – every Earth is under threat.

Time is running out, but Rose won't stop searching until she finds the Doctor...

1.1 The Endless Night by Jonathan Morris

As his parallel universe darkens, Pete Tyler has found a chance of survival. Punch a hole through dimensions and someone can jump through - and maybe find a way to the Doctor's universe.

On her very first trip, Rose visits an Earth that's about to get colder. As a long night begins, Rose meets different versions of her parents. And one man who could help her search. His name is Clive...

1.2 The Flood by Lisa McMullin

Making another leap with a new companion, Rose finds a world suffering environmental change. The rain won't stop, and the government could be hiding the scale of the impending disaster.

While Rose connects with another version of Pete and a strangely compelling young man, Clive meets someone special of his own. In this world, there was no Clive for Caroline to meet, but love can cross dimensions.

Pete decides it's time he accompanied Rose on one of her dimension jumps. But he couldn't have picked a worse time. They arrive in a world where technology took an extraordinary path, and where the recently deceased Pete Tyler had a very different kind of success.

As machines start to break down, Pete meets his widow, and he and Rose must confront truths about their 'family'. But they may not escape this Earth alive.

1.4 The Last Party on Earth by Matt Fitton

Rose and Jackie visit a home very close to the one they left behind. But some old friends are missing, and some are unexpectedly present... Rose meets two young men she knows should be together - it can sometimes take the end of the world to see what's right in front of you.

Meanwhile, the Powell Estate faces Armageddon in the only way it can – by throwing a party. 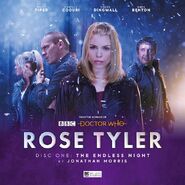 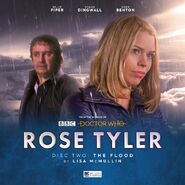 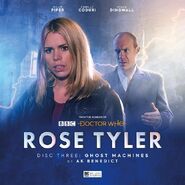 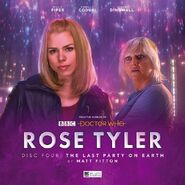 The Last Party on Earth

Retrieved from "https://tardis.fandom.com/wiki/Rose_Tyler:_The_Dimension_Cannon_(audio_anthology)?oldid=2841080"
Community content is available under CC-BY-SA unless otherwise noted.