Rose was a novelisation based on the 2005 television episode Rose, written by Russell T Davies. It was the first release under the Target Books banner since The Paradise of Death in 1994.

In 2020, Davies released a 21st chapter, following on from page 197, where this novelisation ends. This was entitled Revenge of the Nestene, and released independently through Davies' Instagram as part of a COVID-19 crisis Doctor Who: Lockdown! event, celebrating the 15th anniversary of the television episode.

“Nice to meet you, Rose. Run for your life!”

In a lair somewhere beneath central London, a malevolent alien intelligence is plotting the end of humanity. Shop window dummies that can move – and kill – are taking up key positions, ready to strike.

Rose Tyler, an ordinary Londoner, is working her shift in a department store, unaware that this is the most important day of her life. She's about to meet the only man who understands the true nature of the threat facing Earth, a stranger who will open her eyes to all the wonder and terror of the universe – a traveller in time and space known as the Doctor.

This Target Book was released as an audiobook on 21 June 2018 complete and unabridged by BBC Audio and read by Camille Coduri. 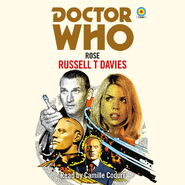