Red Dawn was the eighth story in Big Finish's monthly range. It was written by Justin Richards and featured Peter Davison as the Fifth Doctor and Nicola Bryant as Peri Brown.

Virtually every Fifth Doctor/Peri adventure subsequently released also featured the Big Finish-original character of Erimem. Nothing in this story necessarily forced listeners to believe it happened either before or after Erimem's first story, AUDIO: The Eye of the Scorpion since it made no specific references to how long the two had been travelling.

Though Ice Warrior stories were not uncommon at Big Finish following this initial adventure, Red Dawn proved interesting retrospectively because Nicholas Briggs — later the dominant 21st-century voice of the Ice Warriors — was not at all involved in the production. Matthew Brehner's Zzaal ultimately became a counterpoint to Briggs' several Martian characters, both on audio and television. Indeed, producers Jason Haigh-Ellery and Gary Russell gave voice to the subordinate Ice Warriors, further distancing this story's Ice Warrior's vocal palette from the later Briggsian norm.

Ares One: NASA's first manned mission to the dead planet Mars. But is Mars as dead as it seems?

While the NASA team investigate an 'anomaly' on the planet's surface, the Doctor and Peri find themselves inside a strange alien building. What is its purpose? And what is frozen inside the blocks of ice that guard the doorways? If the Doctor has a sense of deja-vu, it's because he's about to meet some old adversaries, as well as some new ones...

The NASA mission Ares One set off for Mars, captained by Commander Lee Forbes. Upon arrival, pilot Susan Roberts is forced to manually land on the planet surface because of the dust storm interfering with the scanning system.

Meanwhile, the Fifth Doctor and Peri arrive in the TARDIS on unknown ground. They discover that they are inside some organic building, made of a green substance. They also continue to find — as they walk through endless corridors — ice-pillars, which seem to hold a shape inside them.

After a quick walk across the surface, Commander Forbes discovers what they are looking for and when he embarks the rocket again, he deduces that the communications have gone down. This turns out to be true, and so he and his pilot exit the transport and investigate the green building. They suddenly find the Doctor and Peri who have been wandering for a while.

The Doctor joins forces with the Commander as Susan takes Peri to the rocket for an insulation suit. The Doctor and the Commander discover some sort of ceremonial room and find more ice-moulded pillars, which seem to crack in the warming air. The Doctor realises what is inside each one: Ice Warriors. 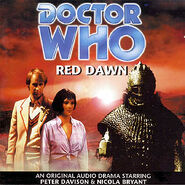 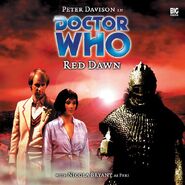 Retrieved from "https://tardis.fandom.com/wiki/Red_Dawn_(audio_story)?oldid=2809002"
Community content is available under CC-BY-SA unless otherwise noted.