Ravenous 4 was a full cast audio anthology released on 9 October 2019 by Big Finish Productions. It was the fourth and final release of Ravenous and featured Paul McGann as the Eighth Doctor.

The Ravenous are the most relentlessly voracious creatures ever to haunt a Time Lord, and they now have the Doctor's scent. The only thing left to do is stand and fight. It will take a monster to defeat a monster. But what will be the cost?

The past, the present, and the future conspire against the Doctor as he fights to defeat the only creature ever to strike fear into the hearts of a Time Lord.

Seeking respite after their battle with the Ravenous and hoping to find a quiet place where the Eleven can recuperate, the TARDIS crew visit the Still Foundation. But all they find is a small band of survivors under siege from a terrifying predator. A predator that hunts by sound.

4.2 Planet of Dust by Matt Fitton

On the parched world of Parrak, the Master holds sway. But he is exhausted and desperate, and his final hope for survival lies somewhere beneath the desert. When the TARDIS arrives, alliances will be made and trust will be broken – and feuding Time Lords will discover the Ravenous never, ever give up.

The Doctor investigates a mystery in the vortex, Liv follows the trail of their enemy, and Helen searches for a god. Everywhere they go there is a Master or Mistress, but is the Doctor's oldest enemy there to hinder them, or to help? With the TARDIS crew scattered and lost, only a miracle can save the universe. And for that to happen someone is going to have to die. 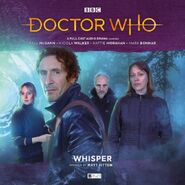 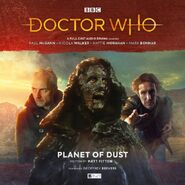 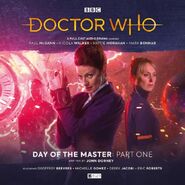 Day of the Master Part 1 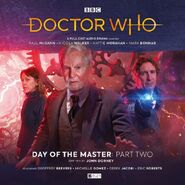 Day of the Master Part 2