You may be looking for the species.

Ravenous was an audio series released by Big Finish Productions, narratively following the events of Doom Coalition. It starred the Eighth Doctor, played by Paul McGann, and his companions Liv Chenka, played by Nicola Walker, and Helen Sinclair, played by Hattie Morahan.

First announced on 9 January 2018,[1] the series mainly dealt with the Ravenous, an ancient species which struck fear on the Time Lords. Despite the Ravenous being a common theme on all anthologies, producer David Richardson considered the series to be "somewhat looser in structure than Doom Coalition".[1]

Like on Doom Coalition, Mark Bonnar guest-starred as the Eleven, although he was no longer the series' main antagonist. In fact, in Ravenous 3, the Time Lord joined the TARDIS crew, allying himself with the Doctor once he realised that he couldn't defend himself from the Ravenous alone. 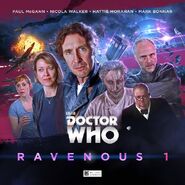 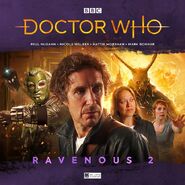 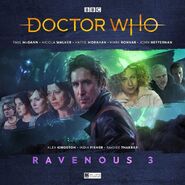 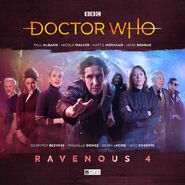