Coverage of the new series includes; Pick of the Week,Pick of the Day, Drama of the Week, credits and listing details.There is also a picture preview for next weeks issue 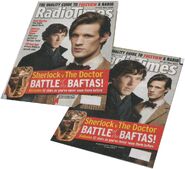 Next week in Radio Times: pictured are Amy Pond, Rory Williams, River Song and the Eleventh Doctor - "Doctor Who Can the Time Lord cheat death - again?"

50 Years of Doctor Who

50 Years of Doctor Who

The Bells of Saint John cover

Who Am I? cover 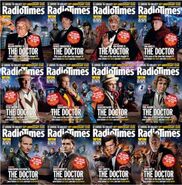 Vote Doctor Who! (one of six variant BAFTA covers)

Doctor Who returns to television

For a breakdown of Radio Times extensive coverage of the series (including covers, articles, features and offers);

Retrieved from "https://tardis.fandom.com/wiki/Radio_Times:_The_2010s?oldid=3000057"
Community content is available under CC-BY-SA unless otherwise noted.