You may be looking for the in-universe magazine.

It also sporadically published original Doctor Who fiction, beginning in 1964 with the Christmas short story Barbara in Wonderland (which, contrary to expectations, did not star Barbara Wright, but did however feature the First Doctor and two Daleks). Other notable Radio Times DWU-related works included the first crossover between Doctor Who and another series (in the form of the 1965 comic strip Pugwash Ahoy!), the special Dalek short story We are the Daleks! in 1973, and the 20th anniversary short story Birth of a Renegade (1983). In the 1990s it even published a reasonably long-running serialised Eighth Doctor comic strip.

For a breakdown of Radio Times extensive coverage of the series (including covers, articles, features and offers): 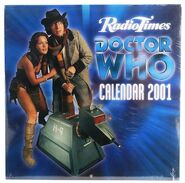 A1(84 x 59.4cm) size, double sided poster featuring the Daleks crossing Westminster Bridge (a recreation of the iconic 1964 image of when the Daleks invaded Earth)on one side and,
on the reverse;

Photograph: Matt Holyoak
Image Manipulation: Ian McKinnell
Art Directon: Paul Smith
A Christmas poster offer to readers offered both Walace and Gromit and Doctor Who The Next Doctor double-sided posters
One side a graveyard shot of Mercy Hartigan (centre) with both 'Doctors' on either side and the Cybermen in the background. 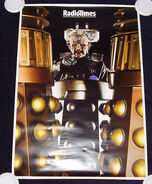 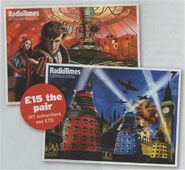 Exclusive Photograph: The Eleventh Doctor and Amy Pond inside the TARDIS

Exclusive Photograph: Featuring the new Daleks on Westminster Bridge with spitfires in the skies.

Radio Times holds its own annual Radio Times Covers Party, a prestigious event where cover stars are awarded framed covers, since the 2005 relaunch the Doctor Who team have been the recipients of more covers than any other series on TV.

Community content is available under CC-BY-SA unless otherwise noted.
Advertisement