[[actor::Jeff Rawle|Jeff Rawle]]
Plantagenet was a member of the human colony on Frontios, and the son of Captain Revere. He became the colony's leader after his father was abducted by the Tractators. He and Brazen initially suspected the Doctor was responsible for the meteorites bombarding the colony. He was also abducted by the Tractators, who planned for him to replace his father as controller of their excavating machine when he died, but the Doctor rescued him. (DW: Frontios)
Retrieved from "https://tardis.fandom.com/wiki/Plantagenet?oldid=647826"
Community content is available under CC-BY-SA unless otherwise noted.
... more about "Plantagenet"
RDF feed
Has image
File: 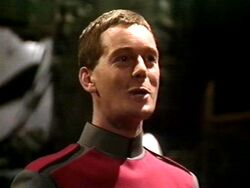