Tardis
Register
Don't have an account?
Sign In
Advertisement
in: Prose stubs, 2007 novels, Stories set in the 1880s,
and 5 more

You may be looking for the titular gun.

Peacemaker was the twenty-first novel in the BBC New Series Adventures series. It was written by James Swallow and featured the Tenth Doctor and Martha Jones.

The peace and quiet of a remote homestead in the 1880s American West is shattered by the arrival of two shadowy outriders searching for 'the healer'. When the farmer refuses to help them, they raze the house to the ground, using guns that shoot bolts of energy instead of bullets... 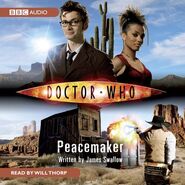