Paradox Lost was the forty-seventh novel in the BBC New Series Adventures series. It was written by George Mann and featured the Eleventh Doctor, Amy Pond and Rory Williams.

"The Squall feed on psychic energy. They spread like a plague and if they are not stopped they will strip the Earth clean..."

London 1910: an unsuspecting thief finds himself confronted by grey-skinned creatures that are waiting to devour his mind. London 2789: the remains of an ancient android are dredged from the Thames. When reactivated it has a warning that can only be delivered to a man named "the Doctor".

The Doctor and his friends must solve a mystery that has spanned over a thousand years. If they fail, the deadly alien Squall will devour the world. 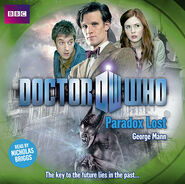