A medical trial's gone terribly wrong, and one of the test subjects is loose on the streets of Cardiff. Within hours a virus is raging out of control and the bodies start piling up.

The Government scrambles to control the outbreak, but isn't too keen on anyone finding out the dark history of the virus. Captain Jack Harkness has encountered the infection before and knows that something alien is hiding inside it.

With the city sealed off and murderous mobs rampaging through the streets, Torchwood has to save something even more important than the human race.

A man thinks that he is in a cave back when he was younger when he realises that he is in Cardiff, covered in blood and holding a knife. Andy tells him to drop it and has him arrested. He remembers what has happened and says that he has to speak to Torchwood. Gwen and Ianto are on a speed boat watching Jack ride a Keranium like a horse when Gwen receives a call from Andy, telling her about the man he arrested.

Frances Godalming is in a facility full of muffled people and reports to someone over the phone with connections to Whitehall that a test subject, Luke, has escaped. She asks that he get Whitehall involved before setting fire to the test subjects, telling them that Heights Pharmaceuticals thanks them for their assistance.

Jack has been underwater for two hours repairing an alien spacecraft when he finally re-emerges and the Keranium takes off. The three of them return to the Hub.

In police custody, the man - Luke - scratches his skin and babbles, talking about loving someone that he wants to kill and that he needs to speak to Torchwood.

Gwen answers the phone to Rhys, who is returning to the UK, and apologises for not making it home. Jack leaves for the police station and tells Ianto to look into the ongoing phenomenon of people going into dream states and causing accidents. Andy takes him to see Luke, who is asking for his wife and tearing into his skin, exposing moving wires and saying that it is "all good thinking". Jack recognises the symptoms and takes a sample. They meet Dr Godalming, who is looking for Luke.

Gwen and Ianto investigate a bus accident caused by the driver entering a dream state and meet a police officer who scratches his skin. Jack calls Davey and threatens to expose Operation Red Dawn if he does not explain how a Good Thinking test subject could be in Cardiff. Davey hangs up and Dr Godalming tells Jack that the Ministry of Health agrees that nobody should leave the city. He orders Gwen and Ianto to return to the Hub and the city is quarantined.

A man walking around the city on the phone begins scratching, as does a woman with her GP and multiple people across Cardiff. Andy worries that he might have caught it from Luke, to whom somebody gives a gun in his cell. He escapes and brandishes his gun, demanding to see his wife. Rhys arrives at the road block and Gwen and Ianto return to the Hub, where they find that Jack has locked himself away to keep them safe.

Andy subdues Luke after he tries to shoot him. Dr Godalming shoots Andy and goes to kill Luke as part of a cover-up. Jack tells Gwen and Ianto about the Good Thinking programme and Gwen asks Rhys to keep away. Ianto is sealed in the Hub when it enters lockdown but Gwen makes it out.

On the news, Emilia Martin says that they can only pray that Cardiff will survive to see another day.

Ianto is trying to get out of the Hub whilst Jack succumbs to the virus, hallucinating that he is back when he first experienced it and when he was trapped and burnt alive with several other men. Andy is in an ambulance where a paramedic begins scratching and cuts herself with a scalpel. Rhys is at the road block at the Severn Bridge and scares the other people away by claiming that there is a dirty bomb. They abandon their cars and flee.

In the Hub, Jack hallucinates talking to Norton, who had been the one to set fire to him and the others. Ianto goes to Jack and uses Owen's healing spray on him, listening to his delusions. He seems to become lucid, but then tells Ianto to run as he is entering Stage 2. He tells Ianto that he loves him.

Dr Godalming gives Martin an interview on television and tells her that the symptoms result from a pathogen, that a vaccine is being worked on and that the infected will be isolated for everybody's safety.

Ianto looks up Norton in the Torchwood database and uses a pharadyne projector to beam him from 1955 to 2009. Norton tells him that he does not know how to stop the virus, which Andy has now caught, leading to him being taken away by Heights Pharmaceutical. Norton says that he gave Good Thinking, designed to identify and eliminate "problem citizens", to the US on orders from the very top. He goes back to 1955, placing his files in the vault with an embargo and arranging for Jack's door to open.

Jack leaves his room and chases Ianto. Norton seems to help Jack, displeased with Ianto for threatening his future self, and directs Ianto to temporary safety in Jack's office, telling him how to activate the emergency sterilisation system. When the door opens, Jack sends Norton back and Ianto threatens to kill the both of them with the sterilisation system. Jack enters Stage 4 and the lockdown ends, allowing Ianto to go and find help for Jack.

Dr Godalming has received a transmission from Jack's mind and informs her boss that he has been infected. Soldiers break into the Hub and collect Jack's body whilst Rhys breaks through the road block in a lorry. Gwen, scratching herself, leaves him a voicemail telling him that she loves him and is going to find him.

Dr Godalming is on a conference call with Heights and a minister and debriefs them. She believes that Jack has wiped out Torchwood and says that the next stage of the plan is inoculation. She sets up the Emergency Response Centre at Cardiff Castle and does an interview with Martin, telling the audience to support the government and that a vaccine is forthcoming.

Jack revives in Heights' custody and Gwen hallucinates that she is with Rhys before he calls her. She tells him that she is at Stage 1 and should keep away. Jack is tied down next to Andy and has a blood sample taken by Dr Larsen. Outside the castle, Ianto meets Luke and heads into the Marquess of Bute's secret passage inside whilst Gwen enters Stage 2. Dr Godalming announces the successful completion of a vaccine which will be given only to those who bring the infected to the Emergency Response Centre. Luke tells Ianto that she is his wife and Dr Larsen confronts her about the vaccine, Provictus.

Megwyn Davies takes her mother, Bronwen, to the castle and is injected with Provictus. Ianto and Luke get into the castle and hear the afflicted being shot. Dr Godalming argues with a professor on the news and notices Martin scratching. She admits to Dr Larsen that the Provictus strain is active and information being transmitted from the infected to the Data Core. Ianto and Luke find people sedated and left to die, tagged as "BTCs" or "Bad Thinking Citizens".

Jack and Dr Larsen join forces and head to the Data Core, sedating the guard. Gwen finds Rhys and shoots him in the shoulder. Becoming more lucid, she helps him up and takes him to the castle to be seen to, stealing a car after Heights men spot them. Ianto hands over Luke, who is beginning to lose control, when they are seen by guards. Gwen encourages the mob outside the castle to work together to break in and claim the cure. Jack accesses the Data Core and finds that it can be used to insert thoughts into the infected. He sets up a firewall and tells Dr Larsen to get to work making a real vaccine. She finds that Jack's antibodies can inoculate against the virus.

Gwen and Rhys get into the castle and Dr Godalming makes an announcement, saying that the vaccines are now available for all. Dr Larsen tells Andy that he has entered Stage 1 and, when Gwen enters, tells her the truth about Provictus. Jack, Gwen and Ianto are reunited.

Dr Godalming calls the minister, who is interested in what might be found from Jack's memory, and updates him. He tells her that, as there has been a report of an Invictus breakout in Newport, she is to have the whole of the UK given Provictus, which she announces on the news. Jack approaches her and tells her that there is a trojan horse in his personal data which has deactivated all versions of the virus from the Data Core. He tells her that she and Luke have both been used and controlled and lets her drive away to safety to avoid being killed by her "husband" or the mob.

Gwen and Dr Larsen give out a real antidote as the Heights personnel drive away in their vans. Jack calls the minister and tells him that he will be going to prison. Dr Larsen tends to Rhys and Dr Godalming gets into her car, leaving the city and wishing everybody dead. She finds Luke in the backseat, sent there by Jack, and asks him what he is going to do to her. He tells her to keep driving and to "see what happens".

Gwen and Rhys go to an amusement park and Ianto confesses to Jack that he had the virus but had been resisting it. 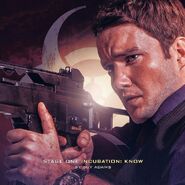 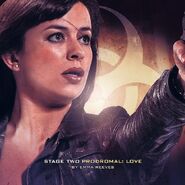 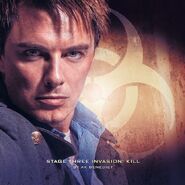