Tardis
Register
Don't have an account?
Sign In
Advertisement
in: Audio stubs, Tenth Doctor Adventures audio stories, Out of Time,
and 5 more

Out of Time (audio story)

Out of Time was the first story in the Out of Time series, produced by Big Finish Productions. It was written by Matt Fitton and featured David Tennant as the Tenth Doctor, Tom Baker as the Fourth Doctor and Nicholas Briggs as the Daleks.

The Cathedral of Contemplation is an enigma, existing outside time. It turns through history, opening its doors across the universe to offer solace to those in need.

Occasionally, the Doctor drops in – when he's avoiding his destiny, it’s an ideal place to get some perspective. Only this time he's already there from several lives earlier, so when dimension barriers break down, his past and present collide.

And when the Daleks invade and commandeer the Cathedral, two Doctors must unite to stop them – or face extermination twice over! 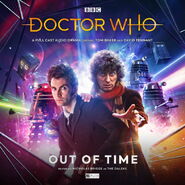 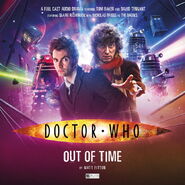 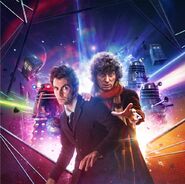 Simon Holub sought to design the front cover as if it was a photoshoot from the revived era, which included both Doctors, their TARDISes, Daleks from their respective eras and "a subtle hint of title sequences in the background." (VOR 137)

Jonathon Carley revealed in a YouTube interview that Tom Baker's pose is taken from a publicity photo of Peter Capaldi from Series 9 with the jacket tinted brown and the Fourth Doctor's head and scarf added on top.[2]