DW: The Greatest Show in the Galaxy

Nord was someone auditioned for the Psychic Circus.

Nord was a violent and rude who drove a large five-wheeled motorcycle, he was eager to audition for the Psychic Circus. He first encountered the Doctor and Ace several miles outside the circus and refused to help them. When he arrived at the circus, he was imprisoned by the Chief Clown. While in prison with Captain Cook, Mags, and then the Doctor and Ace. Both he and the Captain flipped coins to decide who went into the ring first, but the Captain tricked him and Nord was selected. Whilst in the ring, he showed great strength but when asked to tell a joke he failed miserably and was killed by the Gods of Ragnarok. (DW: The Greatest Show in the Galaxy)

Retrieved from "https://tardis.fandom.com/wiki/Nord?oldid=453707"
Community content is available under CC-BY-SA unless otherwise noted.
... more about "Nord"
RDF feed
Has image
File: 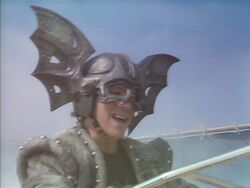