Nightmare of Eden was the fourth serial of season 17 of Doctor Who. Narratively, it was notable for its anti-drug theme, delivered in an unusually unvarnished way for Doctor Who. Though the drug was given a "sci-fi" name and origin, it was nevertheless a direct commentary on drug use and trafficking.

Eden was a notoriously difficult production, with cast and crew alike openly disagreeing with director Alan Bromly. In the end, Bromly resigned partway through the shoot while producer Graham Williams finished the programme himself; it was this incident which convinced Williams to leave the show at the end of Season 17. (DOC: The Nightmare of Television Centre)

Even though it was a disagreeable shoot, Eden did boast a few production peculiarities of note. It was the only serial ever written by Bob Baker without his usual writing partner, Dave Martin. It was also, according to Colin Mapson, the first Doctor Who serial in which the model effects were recorded on video, instead of film. (DCOM: Nightmare of Eden) Although Mapson was not enamoured of the results, Graham Williams extolled their virtues in at least one memo to his superiors. Video was very much cheaper than film, and Williams found the compromise between quality and cost acceptable. (DOC: The Nightmare of Television Centre) Nevertheless, the technique did not prove popular with Williams' successor. Most model shots in future serials would again be committed to film.

The Fourth Doctor and Romana meet the scientist Tryst, who has with him a Continuous Event Transmuter (CET) machine. It contains crystals on which are stored supposed recordings of planets that he and his team have visited.

Two spaceships, the Empress, a cruise liner, and the Hecate, a smaller ship, collide with each other, creating an unstable area where the two ships meet. The TARDIS materialises on the Empress, and the Doctor, Romana and K9 make their way to the bridge where they see the two captains, Rigg of the Empress and Dymond of the Hecate, arguing about their losses. The Doctor thinks he knows how to separate the ships. The Doctor and K9 go to the power unit, led there by Secker, who is acting strangely and is disinterested with his work. He sneaks away, unknowingly followed by the Doctor and K9, and takes a drug out of a drawer, moments later the Doctor gets into the drawer and finds it. K9 analyses it - it is vraxoin, a deadly drug.

Meanwhile Romana and Dymond go to the first class lounge and meet members of a zoological expedition - Tryst and his assistant Della. Tryst has specimens from various planets stored on his Continuous Event Transmuter (CET). Part of the machine includes a large screen that shows the planets he's visited, but the planets onscreen are not just images. Romana understands the principle behind the machine - matter transference of dimensional control - and is not impressed.

The Doctor tells Rigg about Secker and the drug, and wonders about Tryst's travels. He meets Tryst, who seems happy to meet another scientist. The Doctor learns that one of Tryst's men died on the planet Eden. The Doctor and Rigg go to the power unit and use K9 to get to the source. Romana, alone in the lounge, plays with the controls to the CET. She looks at the projection of Eden and sees a face in the trees. Della comes in and tells her that Tryst would not like her using the machine.

Secker is looking for his drugs when he is attacked. He screams and the Doctor and Rigg find him. He has been cut by something and is taken to the sick bay. The Doctor goes to find Secker's drug but is met by someone else who shoots him and takes the drug from the Doctor's pocket.

K9 Mark II fires at the monster and they cover the hole. Back in the control room, Rigg scans the ship for vraxoin, with negative results. They make plans with Dymond to try to separate the two ships.

As the Doctor and Romana explore the projection, they discuss the problems with Tryst's machine. The Doctor is attacked by a man-eating plant monster, but bites it in the root, which causes it to release him.

Back on the Empress, Tryst tells the agents that the selector for the machine is gone and he can't turn it off.

The Doctor and Romana are attacked by one of the monsters, but are saved by a man who shoots the monster. He identifies himself as Stott, and the monsters as Mandrels. Taking them to a safe place, he tells them he works for the Space Corps' Intelligence Section. He thought the Doctor and Romana were the drug smugglers, but overheard their conversation. He now thinks Secker may have been involved. The three of them leave the projection and end up on the Empress where K9 is.

The Doctor works in the power room in order to separate the two ships. A Mandrel chases Romana into the room and then grabs the Doctor. K9 stuns it but the Doctor thinks it's dead. He sends Romana to the bridge and K9 to the demat gun to await his signal.

Romana reaches the control room. Rigg wants her to give him more drugs and attacks her when she can't. Fisk enters and shoots Rigg. He tells Romana she is going to be killed, and tries to stop her touching the power controls.

In the confusion, Romana escapes from Fisk. Now that the ships are separated, Dymond wants to go back to his ship but Fisk won't let him - he is wanted as a witness.

The Doctor wakes up on the Hecate and discovers a laser. He hides from Dymond who has returned, and discovers on Dymond's computer that he is involved in the drug smuggling. Dymond gets in a shuttle to return to the Empress, and the Doctor stows away.

DVD, video and other releases[] 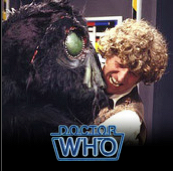 The story is also available for streaming in the US through Hulu Plus or Amazon Instant Video in the UK. 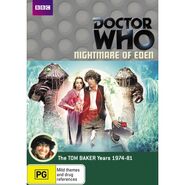 It was also released as issue 134 of Doctor Who DVD Files.