Night of the Humans (novel)

Night of the Humans

ISBN 978-1-84607-969-6
Night of the Humans was the thirty-eighth novel in the BBC New Series Adventures series. It was written by David Llewellyn and featured the Eleventh Doctor and Amy Pond.

"This is the Gyre – the most hostile environment in the galaxy."

250,000 years' worth of junk floating in deep space, home to the shipwrecked Sittuun, the carnivorous Sollogs, and worst of all – the humans.

The Doctor and Amy arrive on this terrifying world in the middle of an all-out frontier war between Sittuun and Humans, and the clock is already ticking. There's a comet in the sky, and it's on a collision course with the Gyre...

When the Doctor is kidnapped, it's up to Amy and "galaxy-famous swashbuckler" Dirk Slipstream to save the day.

But who is Slipstream, exactly? And what is he really doing here?

When the TARDIS is pulled off-course, the Doctor and Amy make an unexpected trip to the Gyre. It is made of junk from all time and space, even a satellite Earth sent out thousands of years ago. They encounter aliens known as the Sittuun, who kidnap them. In mid-kidnapping, the Doctor falls out of their vehicle and is kidnapped by primitive humans.

Amy explains how she and the Doctor got to the Gyre to the Sittuun, confusing them for the "locals". She learns they came to plant a bomb to destroy the Gyre before a comet strikes and endangers other worlds with its debris. Meanwhile, the Doctor is taken to the human camp. He learns they are descendants of a crashed cargo ship who believe they are on Earth. When the Doctor tries to tell them the truth, they call him a blasphemer and order him put to death.

Elsewhere, Amy has bonded with Charlie and met Dirk Slipstream, a man who has answered the distress call the Sittuun sent when they crashed. She persuades him to rescue the Doctor. However, he double-crosses them and leaves to find something the humans have in their camp. He persuades them to spare the Doctor and uses him to find the Mymon Key, an object that can harness the forces of the universe.

The comet draws closer, forcing them to flee. Dirk is knocked out and the Doctor makes sure the Key, which is pulling the comet to them, is left behind. They land the TARDIS in Dirk's ship, commandeered by the Sittuun, and take off. Dirk regains consciousness and flees to an escape pod before the comet the Sittuun bomb goes off, destroying the Gyre. 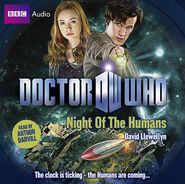