Molten Heart was the sixty-fourth novel in the BBC New Series Adventures series. It was written by Una McCormack and featured the Thirteenth Doctor, Graham, Yaz and Ryan.

Deep below the surface of the planet Adamantine lies a crystalline wonder world of lava seas and volcanic islands, home to living rock-people.

But when the Doctor and her friends arrive on Adamantine they find it under threat. The seas are shrinking, the magma is cooling, and mysterious, fatal seething pools are spreading fast.

Something has come to Adamantine – but what does it want? Fearing an invasion is underway, the Doctor must lead an expedition to the surface of the world to save its molten heart... 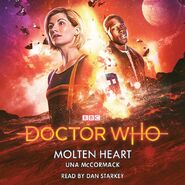