Mission to the Unknown (novelisation)

Stranded in the jungles of Kembel, the most hostile planet in the Galaxy, Space Security agent Marc Cory has stumbled across the most deadly plot ever hatched - the Daleks are about to invade and destroy the Universe. Cory has to get a warning back to Earth before it's too late-but the Daleks find him first.

Months later the Doctor and his companions arrive on Kembel and find Cory's message. But it may already be too late for Earth - the Daleks' Masterplan has already begun...

Mission to the Unknown[]

This Target Book was released as an audiobook on 6 May 2010 complete and unabridged by BBC Audio and read by Peter Purves and Jean Marsh, with Dalek voices by Nicholas Briggs. 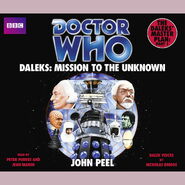