Tardis
Register
Don't have an account?
Sign In
Advertisement
in: Dalek television stories, Stories set in the 40th century, Stories with disputed titles,
and 3 more
English

Mission to the Unknown (TV story)

Mission to the Unknown was the second serial of season 3 of Doctor Who. It is the only Doctor Who television story not to feature the Doctor, any of their companions, or the TARDIS. This story was also notable for being the only one-part serial in the classic era.

It was recorded with Galaxy 4 as part of the series' second recording block. It was a single-episode prologue to The Daleks' Master Plan and was the last episode of Doctor Who for which Verity Lambert served as producer.

Though the episode is currently missing from the BBC archives, it was reconstructed in an animated format through a private project led by Ian Levine.

The story was also carefully recreated by students, graduates and staff at the University of Central Lancashire and was released on YouTube on 9 October 2019, with original production values of the 1960s.

On the planet Kembel, Space Security Service agent Marc Cory is investigating a recent sighting of a Dalek spaceship. His suspicion that the creatures may have established a base proves well-founded. He learns of a plot by the Daleks to invade and destroy the Solar System, but he is discovered and exterminated. The Daleks and their allies vow to conquer the universe, beginning with the planet Earth.

A man, Jeff Garvey, is lying on the ground in the jungle on Kembel. He wakes and sits up. His face twists in agony. When the pain passes he stands. He starts repeating, "Kill! Kill!"

Meanwhile, two men named Marc Cory and Gordon Lowery are trying to repair their ship from UN Deep Space Force Group 1 with little success. The two men are very hostile to one another, mainly because Lowery wonders why Cory landed on Kembel in the first place due to the fact that it is one of the most hostile planets in the galaxy. They speculate where the third member of their crew, Garvey, has gone. Little do they know that Garvey is hiding in the undergrowth watching them. When Cory goes into the ship for more tools, Garvey sneaks up behind Lowery, drawing his gun. Just before Garvey shoots, Cory returns and shoots Garvey dead. Lowery is initially shocked at Cory's act, but Cory shows Lowery a long thorn from behind Garvey's ear. Cory explains that it is a Varga thorn, one sting from which can render the victim into a homicidal killing machine and eventually themselves become a Varga plant.

Cory and Lowery go into the spaceship, leaving Garvey's body. Once inside the ship, Cory reveals to Lowery that he is an agent from the Space Security Service and possesses a licence to kill. He explains they are all there on a mission to stop the Daleks. Lowery states that he is confused due to the fact that the Daleks have not been heard from for a thousand years. Cory reveals that the Daleks have started to seize planets in different galaxies and that a Dalek spaceship has recently been spotted in the Solar System. Cory also informs Lowery that Varga plants are indigenous to the Dalek's home planet Skaro, so he believes that it is proof positive that the Daleks have established a base on this planet.

Outside the ship, Garvey's hand begins to twitch and hair starts to grow over his body, as well as Varga thorns; he is starting to turn into a Varga plant.

In the Dalek city on Kembel, the Dalek Supreme waits to be updated on the latest developments. He is told that the representatives from the seven planets will arrive soon and their meeting can start. The Dalek Supreme then sends out a troop of Daleks to destroy the human ship.

After reaching the conclusion that they will not fix the ship on time, especially now they suspect that the Daleks will be aware of their location, Cory takes drastic measures. He plans to use a small rocket containing a recorded message to report their position to any rescue vessels. They leave the ship only to see a large group of Varga plants slowly descending upon them. As they have this conversation the two men see a large spaceship looming above them. They realise it is nothing that can be seen in the Solar System and decide it must be something hostile. As they start to prepare the message, the Varga plants are the least of their worries — some Daleks start to descend upon them. Unseen, the men hide in the underbrush and watch as the Daleks destroy their ship completely. The two men slink away with their small rocket and their recording device, but as they do Lowery slips and his hand is impaled on a Varga thorn.

Lowery is in pain and is still trying to suck the Varga poison from his hand. He realises that Varga spines are growing all over his body and quickly covers them when he hears Cory returning. Cory has heard what the Daleks said on the loudspeaker and knows of the plan to conquer the Solar System. When Cory realises that Lowery is becoming a Varga plant, he opens fire and kills him. Cory then picks up the rescue beacon and starts recording his SOS message. However, as he is hastily recounting the new information, some Daleks advance upon him and exterminate him. Assuming Cory's information has died with him, the Daleks leave, chanting "Victory". However, both the beacon and the message survive on the planet's surface unscathed...

In the Dalek city, the representatives from the seven planets have gathered in a conference room. They are worried about the humans; they consider them hostile, but the Daleks assure them that the humans will be dealt with. The meeting is held and the seven delegates all agree to join forces in an alliance with the Daleks. The Daleks lay out the plan for seizing the Solar System by attacking Mars, Venus, Jupiter, the Moon Colonies and, finally, Earth...

Perhaps more than any other Doctor Who production, Mission to the Unknown generates confusion and debate over both the title used and the serial/production code allocated.

No Doctor Who story from this period has an overall on-screen title. The story was referred to either by a production code or an internal title by the production team. (For example, the early 1965 story featuring Nero was "Serial M" or The Romans.) The two were confusingly used interchangeably in many production and overseas sales documents.

Mission to the Unknown generates further confusion because some documents do not refer to it as a serial but rather as a "cutaway episode". As the story was produced alongside Galaxy 4, the two appear to have been referred to together. Several of the production codes offered are either Serial T or Serial T +, an appendage.

Early in 1965, the term Dalek Cutaway started to be used to describe the episode in the production office. The on-screen title Mission to the Unknown came later but both continued in circulation, with Dalek Cutaway seemingly being used in places as both a story title and a production term. The abbreviation "DC" also appears on a few early production documents.

Design documents successively refer to the episode as "Serial T/A" and later "Serial T Episode 5". The episode's camera script gives Dalek Cutaway as a description and a handwritten addition states "Serial T Episode 4" (which is the wrong number). Later, when the videotape of the episode was wiped, the relevant paperwork referred to "Serial Ta Episode 1/1".

Publicity material, meanwhile, referred to the episode as "The Beasts From UGH" (Universal Galactic Headquarters).

When it came to offering the story for sale overseas, the synopsis sent by BBC Enterprises gave the title as Mission to the Unknown (Dalek Cutaway). The 1974 Enterprises document A Quick Guide to Doctor Who, which listed the stories produced so far for potential overseas buyers, gave the title as Dalek Cutaway (Mission to the Unknown) and did not offer any production code at all.

When fans started compiling reference books in the mid-1970s it was this latter document which formed the basis of many lists. The story was referred to alternatively as Dalek Cutaway and Mission to the Unknown on many occasions, whilst the production code went vacant until the discovery of the design documents stating T/A. In more recent years the exploration of the BBC's written archives has exposed the problems of the title and production code. 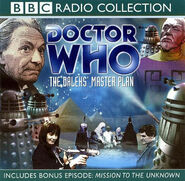 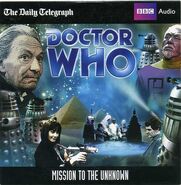 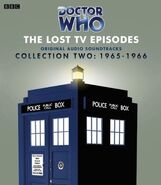 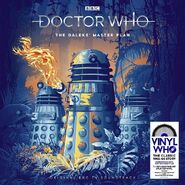