Minuet in Hell was the nineteenth story in Big Finish's monthly range. It was written by Alan W. Lear and Gary Russell and featured Paul McGann as the Eighth Doctor, India Fisher as Charlotte Pollard and Nicholas Courtney as Brigadier Lethbridge-Stewart.

This was the first audio story to feature the Brigadier opposite the Eighth Doctor. It was the second Big Finish audio story in which Nicholas Courtney had reprised his role as the Brigadier. The first was in 2000 opposite Colin Baker's Sixth Doctor in The Spectre of Lanyon Moor.

The twenty-first century has just begun, and Malebolgia is enjoying its status as the newest state in America. After his successful involvement with Scotland's devolution, Brigadier Alistair Gordon Lethbridge-Stewart has been invited over to Malebolgia to offer some of his experiences and expertise.

There he encounters the charismatic Brigham Elisha Dashwood III, an evangelical statesman running for Governor who may not be quite as clean-cut and wholesome as he makes out. One of Dashwood's other roles in society is as patron of a new medical institute, concentrating on curing the ills of the human mind. One of the patients there interests the Brigadier — someone who claims he travels through space and time in something called a TARDIS.

Charley, however, has more than a few problems of her own. Amnesiac, she is working as a hostess at the local chapter of the Hell Fire Club, populated by local dignitaries who have summoned forth the demon Marchosias. And the leader of the Club? None other than Dashwood, who seems determined to achieve congressional power by the most malevolent means at his disposal...

It’s the very early twenty-first century, and the USA is about to admit its fifty-first state, Malebolgia. Two men are competing to become its first governor: former senator Waldo Pickering, and television evangelist Brigham Elisha Dashwood III. However, Dashwood is more than he seems: he is the head of the American branch of the infamous Hellfire Club, composed of the rich and powerful… all of whom are dedicated Satanists. Dashwood is also the founder of a psychiatric institution, the Dashwood Institute — and its newest inmate is the Doctor. If only he remembered who he was… and if only he didn’t believe he was in Hell…

Elsewhere, Charley Pollard has also lost her memory, though bits of it begin to return. She is in a dormitory full of other girls around her age, including one Becky Lee Kowalczyck. They were brought here against their will, and are in the charge of Dashwood’s associate (and secret mistress), Dr. Dale Pargeter of the institute. They will serve as hostesses — with all that that may imply — at the Hellfire Club.

The next day, a group of VIPs tour the Institute, including Senator Pickering, and one Alistair Gordon Lethbridge-Stewart, who is here to assist with Malebolgia’s statehood process (having successfully helped Scotland with a similar procedure). Dr. Pargeter shows them the PSI-859 psionic matrix facsimile regenerator, the technological marvel that she uses to cure her patients, which stores and transfers memories, allowing the then-empty brain to have surgery without risk of personality damage. On the way out, they encounter two patients who were brought in the night before. One, dubbed “John Doe”, declares himself to be Gideon Crane, a reporter from the London Torch; his lucidity gets him freedom from the cell. The other, dubbed “Zebidiah Doe” for differentiation, is the Doctor; but he doesn’t remember himself, and the Brigadier has never seen the Eighth Doctor’s face. Both of them, however, seem to vaguely recognise the other. The Brigadier leaves before pursuing it further. As, elsewhere, the Hellfire Club prepares to literally summon up demons, “Zebidiah” is taken to the machine, where Crane is now assisting, and connects him up - but his mind overloads the machine and causes feedback to strike them both.

After the machine overloads, Zebidiah flees the facility and runs into the Brigadier in an alley. They are chased by quite literal demons, dispatched by Dashwood, who has come to distrust the Brigadier. Elsewhere, Becky Lee and Charley escape the club; Becky Lee makes a strange chant that disables a number of members. Becky says that she is a member of the Order of Saint Peter, which exists to fight supernatural evil; however, she is also the granddaughter of Senator Pickering. They go to him for help.

Meanwhile, Pargeter confers with Dashwood, and tells him about Zebidiah, which leads him to make new plans for the escapee. He calls off the demons, which have just cornered the Brigadier and Zebidiah. However, not realising the connections, the Brigadier returns the weakened Zebidiah to the Institute. He then returns to his hotel and requests additional help from his superiors, who have secretly sent him to investigate Dashwood and the PSI-859 machine; but they are indifferent to the situation.

Becky Lee shows Pickering a confiscated security tape from the club, which is quite incriminating. Pickering takes it to blackmail Dashwood, but Dashwood drugs him, and summons a demon named Marchosias to possess the senator, using the machine to extract Pickering’s mind first. He returns to Pickering’s home, where Charley’s memories have returned. In discussion, he tells them about Lethbridge-Stewart, who may connect Charley to the Doctor. Meanwhile, “Zebidiah” is back in his cell, as is Crane, and a few of his memories have returned. However, Crane believes that he is the Doctor… and he has more of the Doctor’s memories than Zebediah does.

Pickering smashes through Charley’s bedroom door and attacks her. Charley realises he is not actually Pickering anymore; and she smashes a window and flees. With no idea where to go, she returns to the Hellfire club for clues. Meanwhile, Becky finds the Brigadier and exchanges stories with him; he is intrigued by her story, and suggests that the Doctor may really be involved. The Doctor, however, is indisposed; Crane is telling him a very convincing tale, in which Zebidiah was too close to the TARDIS when it crash-landed, and absorbed some of the Doctor’s memories. Zebidiah doesn’t believe it, but he agrees to use the machine to re-establish his own memories. When Pargeter comes for him, he doesn’t realise that she and Dashwood intend to split his mental capacity among twelve other patients.

Charley is captured by Pargeter and Marchosias. She is put back in with the other girls; but when Dashwood sees her, he separates her out to be a central figure in his rituals — the Queen of Hell, who will be possessed by a demon and married to Dashwood. Pargeter becomes jealous, and her jealousy is fed by Marchosias. Charley, however, is beginning to suspect that Marchosias is not what he seems.

Becky Lee and the Brigadier return to the Institute. They are caught by Pargeter, and demand to see Zebidiah, but are denied. They see Pickering/Marchosias on television, withdrawing from the gubernatorial race. Becky Lee slips away and meets Crane, who still thinks he is the Doctor. They come up with an escape plan. Meanwhile, Pargeter uses the machine on Zebidiah. At the Club, Dashwood displays Charley, and uses a device called a trans-D, which sends her through a dimensional interface to "Hell".

In the Institute, each of the dozen new patients believe they are now the Doctor. Becky Lee sets off a fire alarm. Gideon escapes his cell and heads to the laboratory. Pargeter meets Marchosias, who tells her the alarm is false, and that Dashwood has abandoned her for Charley. Pargeter leaves as Becky Lee arrives, and realises that Pickering is not himself — just in time to be knocked out by Marchosias. At the club — or rather, in Hell — Charley is surrounded by demons; but they reject her, as they claim she is already dead. She awakens back in her body at the club. The Brigadier arrives to rescue her, and confronts Dashwood. Pargeter arrives as well, and the Brigadier and Charley escape as she occupies Dashwood, but he then expels her from the room. He prepares to make a public broadcast regarding securing the gubernatorial race.

Crane finds Zebidiah, who claims to be an empty shell now. Crane genuinely wants to help Zebidiah re-establish his own memories, and hooks him back up to the machine; but the minds already connected are not strong enough to trigger the machine. Crane connects himself and Zebidiah forces him to stay connected. His memories of his life as the Doctor are stripped away, along with all the fragments in the other patients, and returned to Zebidiah, their rightful owner. Gideon and the others are knocked out, but restored to themselves. Moments later, the Brigadier and Charley arrive, and have a reunion with the Doctor.

Becky Lee wakes up, and finds that Marchosias has chained her up in the club’s torture room. She tries to turn his fears against him, as she did to the other clubgoers on the first note, but he has no fears to exploit. Pargeter bursts in, angry and full of fear; as Marchosias feeds on such emotions, he is enthralled, and pushes her to vent her rage on Becky Lee. Becky Lee is forced to turn Pargeter’s fears against her, and the woman’s heart gives out, and she dies.

As Crane recovers, the Doctor rewires the PSI machine to return all its stored psyches to their proper owners, even over a distance of a few miles. Crane, with some residual memories from the Doctor, is able to operate the machine when signalled to do so. The others go to deal with Dashwood, and Crane sends Pickering’s mind back to his body. This expels Marchosias, just as he is about to attack Becky Lee with a chainsaw. Crane then sabotages the machine.

The Doctor, the Brigadier, and Charley meet Dashwood at the broadcast studio, but the Brigadier collapses as they enter, apparently worn out. The stage manager, Scott, escorts him to the control room to cool off. The Doctor confronts Dashwood, who arrogantly brags about his plan; but unknown to him, the Brigadier has activated the equipment, and Dashwood’s “confession” went out live on national television. In a single moment, he has destroyed his own career. While he won’t be arrested, the investigation that will surely result will spell the end of both the club and the Institute. Outside, they meet Becky Lee and Pickering; and Becky has the trans-D device. Dashwood snatches it away and flees, threatening to send anyone to Hell if they interfere. Also, Charley realises that the displaced Marchosias has to have gone somewhere — and Crane is with the machine…

They chase Dashwood back to the lab, and barely manage to save Crane from Marchosias, who takes form of his own. Dashwood intends to use the machine to place himself in Marchosias’s body and rule Hell. However, Marchosias is not a demon; he’s a Psionovore, a creature from a realm of cometary dust, which feeds on negative emotions. Drawn to Earth by the Hellfire Club, he appeared as a demon to deceive Dashwood, giving him the design of the machine in order to stir up more trouble and give the Psionovores a continual feast. He’s feeding now, and Crane admits that he set the machine to overload. The Doctor and his friends flee; Dashwood fires the trans-D at them, but its interaction with the adjacent PSI machine causes everything in the lab to be swept back through the dimensional gateway to the realm of the Psionovores. The others escape, but Marchosias and Dashwood are pulled in.

The Doctor has a brief moment of reminiscing with the Brigadier, and then he and Charley leave so as to avoid any questioning. In the TARDIS, Charley asks what the Psionovores meant when they said she was dead, but he dismisses it as nonsense, and they are off again. 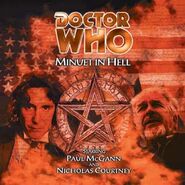 Original cover with the copper logo 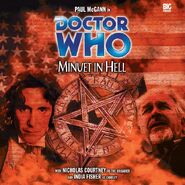