75 (given to later editions)

Meglos was a novelisation based on the 1980 television serial Meglos.

Zastor, Leader of the planet Tigella, rules a divided people. Savants and Deons are irrevocably opposed on one crucial issue – the Dodecahedron, mysterious source of all their power.

To the Savants the Dodecahedron is a miracle of science to be studied, observed and used to benefit Tigellan civilisation. To the Deons it is a god and not to be tampered with.

When the power supply begins to fluctuate wildly the whole planet is threatened, but the Tigellans cannot agree how they should deal with the problem.

Zastor welcomes the arrival of the Doctor and invites him to arbitrate, but the Deons are suspicious of the Time Lord – and perhaps rightly so...

'WHY SHOULD A GOOD LOOKING CHAP LIKE YOU WANT TO CONTROL THE UNIVERSE?'

When the Dodecahedron, the mysterious source of all power on the planet Tigella, goes out of control, the survival of the whole planet is threatened. Zastor, leader of Tigella rules over a divided people: the Savants and the Deons, who have vastly differing views on how to rectify the situation. Zastor welocmes the arrival of the Doctor, hoping he'll mediate and find a solution. However, things are thrown into jeopardy when the Dodecahedron is stolen and the Doctor is arrested as the thief and condemned to death! Someone, somewhere, is messing around with identity - someone who wants to take control of the Dodecahedron for their own selfish purposes.

This Target Book was released as an audiobook on 1 July 2021 complete and unabridged by BBC Audio and read by Jon Culshaw with K9's voice by John Leeson. 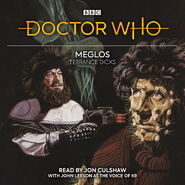