You may wish to consult Meglos (disambiguation) for other, similarly-named pages.

Meglos was the second serial of season 18 of Doctor Who. It featured Jacqueline Hill's return to the programme for the first time since the Doctor Who story The Chase in 1965. However, she was not playing Barbara Wright.

The serial also afforded Tom Baker a chance to take on both villainous and heroic roles in the same story, as William Hartnell and Patrick Troughton had and Peter Davison and Matt Smith would. (TV: The Massacre, The Enemy of the World, Arc of Infinity, Nightmare in Silver)

Meglos came into being after Christopher H. Bidmead purposefully sought out John Flanagan and Andrew McCulloch as new talent. Nathan-Turner was unimpressed with the ideas put forward and the serial was shuffled to various placements in the season, largely because it didn't feature Adric.

Behind the scenes, Meglos was highly innovative as the British Broadcasting Corporation's first use of Scene Sync, a motion control technology that improved the believability of composite shots that used CSO. It would be the only Doctor Who serial to avail itself of the technology. Nevertheless, other BBC productions would use Scene Sync based on this successful test, such as Barry Letts' Gulliver in Lilliput, starring Elisabeth Sladen. (DOC: The Scene Sync Story)

On Tigella, two opposing factions are irrevocably divided over one fundamental issue: the Dodecahedron, a mysterious artefact which provides the entire planet's energy. With the Savants and the Deons locked in a crippling stalemate, and their civilisation on the brink of collapse, the Tigellan leader Zastor seeks the Fourth Doctor's help. But the Doctor and Romana II have been trapped aboard the TARDIS in a time loop by Meglos, the last of the Zolfa-Thurans, who will stop at nothing to steal back the awesome power of the Dodecahedron.

In the TARDIS, the Fourth Doctor and Romana are repairing K9 yet again. They hover near the planet Tigella; the Doctor recalls an earlier visit when he befriended a man named Zastor, leader of the Tigellans, and decides to get in touch with him. On Tigella, a power loss occurs when a transformer breaks down. The inhabitants, living under the surface, find it hard to compensate.

On Zolfa-Thura, a ship touches down. A party of Gaztaks led by General Grugger emerge. They bring forth an Earthling, whom they stun. They brought him to the planet on the promise of reward. A hidden structure emerges from the ground. A door opens and the party enters. Within is Meglos, a Zolfa-Thuran.

Meglos outlines his plans to the Gaztaks. He wants them to have the Dodecahedron to power the galaxy. He tells them of the recent power fluctuations the Tigellans have been experiencing. The Earthling and Meglos are placed in adjacent chambers.

Grugger plans to steal the machinery, but Meglos traps him and his aide, Brotadac, in the room. They agree to comply with his plan.

They then transfer Meglos' consciousness into the Earthling. His skin becomes cactus-like in appearance. Claiming the Doctor is a threat, Meglos traps him in a time loop. As Meglos turns around, it appears he has taken on the Doctor's appearance...

Onboard the TARDIS, the Doctor and Romana continue around the loop. Their only respite is a small period of freedom between the loops. Meanwhile, Meglos leaves with the Gaztaks in their ship. On Tigella, Lexa tells Zastor that she will allow the Doctor access to the Dodecahedron if he swears the Deon oath.

Outside, the Gaztak ship lands. The Gaztaks stay with their ship whilst Meglos enters the Tigellan city and introduces himself. The Doctor and Romana break the loop by performing the actions before they happen, freeing themselves. Meglos swears allegiance to Ti in the Deon ceremony. He tells the Tigellans that it is not safe for them to remain near as they are not Time Lords like him. They agree to leave him to work alone. Meanwhile, the TARDIS lands on Tigella and the Doctor and Romana emerge. They are crossing the ground to the city when Romana is attacked by Bell Plants. The Doctor and K9 continue on their way, unaware of her troubles.

Meglos inspects the Dodecahedron and places a device on it. Lexa and Caris hide outside, having stayed behind to secretly observe the goings on. After Meglos leaves, they enter to find the Dodecahedron gone. The Doctor and K9 arrive at the Tigellan city. The guard tells him he didn't see him leave. Confused, the Doctor shrugs it off. He orders K9 to find Romana after noticing her absence. Meanwhile, Romana frees herself from the plants. She notices scorching on some of the vegetation. Lexa and Caris report their finding to Deedrix and Zastor and order the capture of the Doctor. The real Doctor is taken prisoner.

Romana stumbles upon the Gaztak ship, and finds it responsible for the burning. The Gaztaks notice her and she runs. K9 heads back to the city as his batteries run low. The Gaztaks corner Romana and Brotadac orders her death...

Grugger grabs Romana and questions her as to her origins. She tells him that he wouldn't believe her. Grugger orders her to lead him to her craft.

In the city, Deedrix and Caris speculate on the Dodecahedron's disappearance. An announcement informs them that the power loss has reached critical. This means the city will collapse.

Outside, Romana leads the Gaztaks in a circle back to their own ship. The Tigellans try to stop the damage. They have two hours to prevent the collapse. Lexa and Zastor question the Doctor and he realises they see him as the thief. Meanwhile, Romana convinces the Gaztaks to give her another chance to take them to her ship.

Zastor agrees to allow the Doctor to see the power room. Meglos is harassed by the Earthling he took over, who is fighting him. Meglos approaches Caris and tells her she will obey him. He shows her an impossible thing to prove his power, the shrunken Dodecahedron. Lexa returns to her Deons and gives them orders.

The Deons stage a revolution. They capture the Doctor, Zastor and Deedrix in the power room. Lexa proclaims that, to pacify Ti, all non-believers will be sent to the surface. Lexa tells Zastor that his belief was only words, not actions, and he is to be exiled. Lexa tells the Doctor that he is to be prepared for sacrifice.

Outside, Romana leads the Gaztaks to the Bell Plants. Stamping on a root, she instigates an attack and runs away. The city doors begin to close.

Romana finds K9 in a bush and carries him inside. The Gaztaks break free but are too slow to get indoors. Caris tells Meglos that he cannot escape but he disagrees, telling her there are ventilation shafts. He is again troubled by the Earthling. Though distracted by this, Caris pulls a gun on him and leads him through the city. The Gaztaks batter down the door and fight with the Tigellans. The Gaztaks force the Tigellans back.

Romana sees Meglos, whom she thinks is the Doctor. She hits Caris, dazing her, and Meglos runs away. The Gaztaks ransack the city and Grugger kicks K9, calling him "useless". Caris tells Romana that it was not the Doctor she saw.

Meglos emerges from the city and talks to Grugger, showing him the shrunken Dodecahedron. Meanwhile, Lexa continues her ceremony, hoping the sacrifice of the Doctor will return the Dodecahedron. The Gaztaks and Meglos board their ship again and prepare for take off. Romana and Caris begin to search for the real Doctor.

A large stone hangs above the Doctor. It is suspended by three ropes. A Deon burns through two of them. He moves to the third...

Zastor and Deedrix meet up with Caris and Romana. The Deons guarding the former are told of the attack and head for the surface. The new party heads for the power room. They rush in and Deedrix grabs the flaming torch from a Deon, preventing him from burning the final rope. Zastor and Romana tell Lexa of the Gaztak attack and that Meglos was the guilty one.

On Tigella, the Doctor and Romana bid farewell to the Tigellans before heading back to the TARDIS. However, as they leave, an apparently dead Gaztak rises and shoots at Romana. Lexa takes the shot. She falls, injured, and Romana rushes to her aid. The Doctor tells her they must leave, and Romana grabs K9 and follows him. Caris and Deedrix go with them.

Meglos tells Grugger and Brotadac that the Dodecahedron can be amplified by the screens to fire a beam capable of destroying planets. He asks them to choose a planet to be destroyed and Grugger picks Tigella, angered by the loss of life. The Dodecahedron powers up as the TARDIS lands nearby.

The Doctor decides to trick the Gaztaks by pretending to be Meglos. He leaves the others with the TARDIS. In the room, Meglos takes off his coat and heads out to check the screen's alignment. The Doctor sees him and takes his own coat off. Grugger decides he no longer needs Meglos and tells Brotadac he can wear the Doctor's coat as he always wanted to.

The Doctor enters and interrupts them. He stalls the countdown, telling them preparations need to be made. A Gaztak walks in carrying the real Doctor's coat. The Doctor tells Grugger it is a present for him. Grugger is unimpressed and pressures him to activate the Dodecahedron.

Outside, Romana, K9, Caris and Deedrix decide to have a closer look at the screens. The Doctor tells Brotadac that the screens require two minutes to power up. He heads outside. Grugger tells Brotadac to take the Doctor prisoner, deciding that he can be kept in their spacecraft as he is no longer needed. Brotadac instructs two Gaztaks to capture him. The Doctor hides and they take Meglos prisoner. However, Brotadac and some Gaztaks find the real Doctor and capture him also, still believing him to be Meglos. The take him to their ship.

Romana and her party see the Doctor being taken in. The Doctor is thrown in with Meglos. He tells Meglos that he has inverted the controls so that the Dodecahedron will destroy Zolfa-Thura and all on it. K9 distracts a guard posted to the Gaztak ship. Deedrix tries to knock him out so K9 shoots him. They then rush inside. K9 begins to cut down the door to the Doctor and Meglos' cell.

Deedrix and Caris detain Meglos but he exits the body, leaving the Earthling behind. He shuffles out of the ship. Grugger and Brotadac begin the countdown. At zero the beams will converge and the Dodecahedron will activate. The Doctor, Romana, K9, Caris, Deedrix and the Earthling leave in the TARDIS. Meglos enters the room and returns to his cactus form. Grugger realises that something is wrong but is unable to stop it before detonation.

The Doctor returns to Tigella where he bids farewell to Zastor. Romana informs the Doctor that Gallifrey wants them back immediately. The Earthling, initially wary of returning home since he told his wife he'd be back home much earlier, agrees to let the Doctor take him back in the TARDIS. However, the Earthling is somewhat puzzled (quite understandably) when the Doctor tells him he can drop him off at home before he leaves... 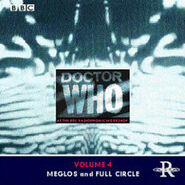 This story was released on VHS in the UK in March 2003.

It was released on DVD on the following dates: