82 (given to later editions)

The Doctor's time-travelling machine is trapped in the flight-path of an alien spacecraft in orbit around the Earth. To avoid the fatal impact of a head-on collision the TARDIS resorts to the only escape possible and materialises onboard the on-coming liner.

This solves the immediate problem, but a new difficulty arises - the TARDIS cannot get off the ship until a radio signal transmitting from Earth has been disconnected.

The Doctor sets off in a Transmat Capsule, having programmed the TARDIS to enable Tegan and Nyssa to follow him once he has dealt with the interference.

'THURLOUGH PICKED UP A BOULDER AND RAISED IT OVER THE UNSURSPECTING DOCTOR...'

Thurlough hated it all: the routine, the discipline , the invented traditions and petty snobbery of a minor English public school. He hated Earth, and when the mysterious Guardian offered him the chance to escape, he jumped at it. Naturally. All he had to do was to kill the Doctor.

This is a novelization by Peter Grimwade of his own original story, first broadcast in 1983 and featuring Peter Davison in the role of the Doctor. Mawdryn Undead was also the first story to feature Brigadier Lethbridge-Stewart since Terror of the Zygons (1975).

This Target Book was released as an audiobook on 5 July 2018 complete and unabridged by BBC Audio and read by David Collings. 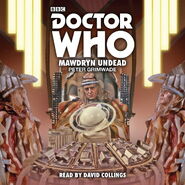