Martha in the Mirror (novel)

Martha in the Mirror

Martha in the Mirror was the twenty-second novel in the BBC New Series Adventures series. It was written by Justin Richards and featured the Tenth Doctor and Martha Jones.

Castle Extremis - whoever holds it can control the provinces either side that have been at war for centuries. Now the castle is about to play host to the signing of a peace treaty. But as the Doctor and Martha find out, not everyone wants the war to end.

The Doctor and Martha don't have long to find the answers - an army is on the march, and the castle will soon be under siege once more. 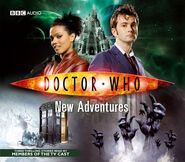