You may wish to consult Marco Polo (disambiguation) for other, similarly-named pages.

Marco Polo was a novelisation based on the 1964 television serial Marco Polo.

The young Venetian Marco Polo is on his way to the Emperor's court in Peking when he meets the intrepid time-travellers, for the TARDIS has landed on Earth in the year 1289.

Marco Polo recognises in the TARDIS a means of winning favour with the Emperor. But in the end the Doctor has no one but himself to blame for the loss of his wondrous travelling machine – which he gambles away to Kublai Khan...

This Target Book was released on 6 December 2018 complete and unabridged by BBC Audio and read by Zienia Merton. 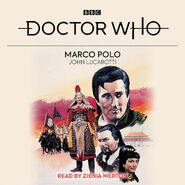 Retrieved from "https://tardis.fandom.com/wiki/Marco_Polo_(novelisation)?oldid=2794651"
Community content is available under CC-BY-SA unless otherwise noted.