You may be looking for House of Lungbarrow or the novel as it exists within the DWU.

Lungbarrow was an original Doctor Who novel written by Marc Platt. Published in Virgin Books' New Adventures range, it was the last of that range to feature the Seventh Doctor.

It is considered the final novel under any banner to feature the Seventh Doctor as the "current" Doctor, although McGann's Eighth Doctor had already made his televised appearance by the time the novel was published. Due to a publication delay, however, an earlier-commissioned novel, So Vile a Sin, also featuring the Seventh Doctor, was published later (although it takes place earlier than Lungbarrow in continuity). One additional Eighth Doctor novel would be published under the Virgin New Adventures banner before the series was handed over to Bernice Summerfield.

"Nonsense, child", retorted the Doctor. "Grandfather indeed! I've never seen you before in my life!"

All is not well on Gallifrey. Chris Cwej is having someone else's nightmares. Ace is talking to herself. So is K9. Leela has stumbled on a murderous family conspiracy. And the beleaguered Lady President, Romanadvoratrelundar, foresees one of the most tumultuous events in her planet's history.

At the root of all is an ancient and terrible place, the House of Lungbarrow in the southern mountains of Gallifrey. Something momentous is happening there. But the House has inexplicably gone missing.

673 years ago the Doctor left his family in that forgotten House. Abandoned, disgraced and resentful, they have waited. And now he's home at last.

In this, the Seventh Doctor's final New Adventure, he faces a threat that could uncover the greatest secret of them all.

Relatives of the Doctor[]

The e-book version published by the BBC on their website included a new cover and seventeen additional illustrations by Daryl Joyce, some with multiple versions. Titles of illustrations are as they were on BBC's site.[3] Daryl Joyce remade the chapter 22 image in 2012.[4] 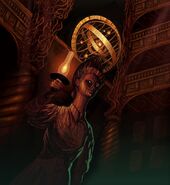 Chapter 5: The TARDIS arrives in the forest-like attic.

Chapter 7: Quences arrives for his own funeral

Chapter 13: The TARDIS hangs in the dust webs

Chapter 19: The battle between Badger and the Catalfaque

Chapter 28: The Doctor shields Quences' body from the Drudges

Chapter 29: The death of Innocet

Chapter 32: In the kitchen, the Orchid Lizard attacks

Chapter 33: The House of Lungbarrow plummets over the cliff