Tardis
Register
Don't have an account?
Sign In
Advertisement
in: Prose stubs, K9 and Company stories, TC novels,
and 8 more

You may be looking for the series or the comic story.

This was also the first novelisation based upon a Doctor Who spin-off production, and the last until novelisations based upon The Sarah Jane Adventures (itself a followup to K9 and Company) began to appear in 2007.

In the sleepy village of Hazelbury Abbas, the Winter Solstice is fast drawing near. It is a time of deep mystery and ancient evil.

Sarah Jane Smith, journalist and former companion to the Doctor, comes to Hazelbury Abbas to start work on her new book. While there she meets Brendan, the young ward of her Aunt Lavinia.

Suddenly Brendan disappears. Has he been kidnapped by the practitioners of Black Magic who are said to live in the village? Is he to be sacrificed to the goddess Hecate on the Winter Solstice?

But Sarah is not alone in her search for Brendan. Across the unimaginable gulfs of time and space, the Doctor has sent her a very special companion: a robotic dog by the name of K9...

This Target Book was released on 3 December 2015 complete and unabridged by BBC Physical Audio and read by John Leeson. 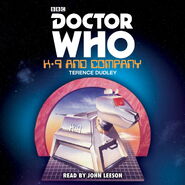