Based on a novel by Lance Parkin;
adapted for audio by Jacqueline Rayner

Just War was the fifth Bernice Summerfield audio drama produced by Big Finish Productions. It was the third in a trilogy of stories known as the "Time Ring Trilogy" whose arc element was the use of Bernice Summerfield and Jason Kane's wedding time rings, given to them when they were married in Happy Endings.

Like Birthright, this was adapted from a Virgin New Adventures novel, rather than from a Virgin Bernice Summerfield New Adventures, which featured Bernice without the Doctor. The original novel Just War featured the Seventh Doctor, Bernice Summerfield, Chris Cwej and Roz Forrester. For this audio adaptation Bernice's role remains intact, whilst Jason Kane takes on a combination of the other characters' roles in the plot.

Continuing the pattern from the previous stories, the photos of Lisa Bowerman and Stephen Fewell are featured on the original audio cover.

"Tomorrow belongs to us, not you. If you were really from the future, Miss Summerfield, you would be a Nazi."

The Nazis occupy British soil and British citizens are being deported to European concentration camps. Those who do not co-operate with the Germans are shot.

This isn't a parallel universe: this is Guernsey, 1941, and it's where Bernice is stranded. With no sign of Jason, she has to endure the full horror of the situation, alone and afraid.

And something, somewhere has gone wrong. The Nazis are building a secret weapon, one that will have a decisive effect on the outcome of the war - and it's up to Benny to put history back on course... 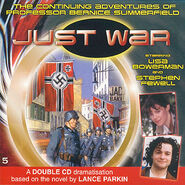