Cardiff to Comic-Con: Doctor Who at San Diego Comic-Con 2018

Jodie Auckland Whittaker (born 17 June 1982[1][2]) played the Thirteenth Doctor in Doctor Who, starting with the 2017 TV story Twice Upon a Time.

Jodie Whittaker was born and raised in Skelmanthorpe, a village in Huddersfield, West Yorkshire. Her parents supported her dream of becoming an actor.

Before becoming a professional actor, Whittaker had worked as a server in pubs. She later reflected that, had she not made it as an actor, she would likely have become a landlord of a pub, like her grandfather.[3]

Whittaker's break through film role came courtesy of Venus, in which she played the title role. The film also starred Vanessa Redgrave and Leslie Phillips, as well as Peter O'Toole in the role which would earn him his eighth and final Best Actor Academy Award nomination. Soon after Whittaker also appeared in the Academy Award nominated short film Wish 143, whose cast also included Rory Kinnear, Jim Carter, and Annette Badland.

In 2007 and 2009 Whittaker also appeared in the reboot of the "St. Trinian's" franchise of films, St. Trinian's, and St. Trinian's 2: The Legend of Fritton's Gold respectively. Her first major science fiction roles came in 2011; she starred in the British alien invasion film Attack the Block alongside Nick Frost, and the Black Mirror episode The Entire History of You. She also appeared with Karl Collins in both of these projects.

From 2013 to 2017, Whittaker appeared as Beth Latimer in the ITV TV series Broadchurch, which was created by Chris Chibnall, who would later cast her as the Doctor, and which featured many Doctor Who and Torchwood cast members, including David Tennant, Olivia Colman, Arthur Darvill, David Bradley, Meera Syal, Eve Myles, Tracey Childs, Jonathan Bailey, Sarah Parish, Susan Brown and Lucy Cohu.

At the time that she began playing the Doctor, Whittaker said that she had not played a lead role with quite so many lines before Doctor Who.[3]

During San Diego Comic-Con 2018, when asked about filming the regeneration scene in Twice Upon a Time, Jodie said it felt really nerve-wracking, because "[she] was in somebody else's costume. [She] was on their set, [she] was in their TARDIS".[4] She was nervous at her first read-through, but got so invested by the time her first line came around that the weight had been lifted.[3]

Whittaker did not take the decision to accept the role lightly, but noted in David Tennant Does a Podcast With that she also did not at all hesitate.[3]

She endeavoured to make her Doctor her own, rather than try to emulate past Doctors, like David's.[3] Indeed, Jodie worked closely with Ray Holman to develop the look she had in mind for the Thirteenth Doctor into the character's costume.[5] She was encouraged to build from her own personality, and to use her native Yorkshire accent rather than RP, to keep the portrayal true to who she is.[3]

In September 2018, Whittaker revealed that she had auditioned for a role in series 5.[6][3] She pointed out in David Tennant's podcast that her name did not come up in speculative lists for who would be the Doctor after Peter Capaldi, even after she was in fact hired.

After her casting was announced, and her proper debut aired, Whittaker expressed delight at the public response to her take on the iconic character.[3] In multiple interviews, including one with BUILD, she quipped that "[the Doctor Who production team] is never getting rid of [her]" as the Doctor, now that she had started, mentioning that she would like to continue in the role as long as possible. 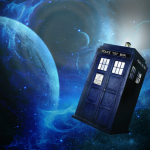