Invasion of the Dinosaurs (TV story)

Invasion of the Dinosaurs

Doctor Who and the Dinosaur Invasion

Invasion of the Dinosaurs was the second serial of season 11 of Doctor Who. It was the final story to be written by Malcolm Hulke.

This story marked a significant plot twist: Captain Mike Yates betrayed UNIT as a result of his traumatic experience in The Green Death. As punishment, he was dismissed from UNIT, but Brigadier Lethbridge-Stewart was sympathetic and arranged for the lessening of his punishment. Yates was made to go on an extended sick leave and given the opportunity to make a quiet resignation, granting him the mercy of a graceful departure in exchange for his past service as a loyal officer. Following this event, it was Richard Franklin's last regular appearance before returning to do a sendoff performance for his character in Planet of the Spiders, the Third Doctor's regeneration story.

This story also saw the debut of the Third Doctor's second and noticeably more advanced car, the Whomobile. The commissioning of this car was the result of Jon Pertwee's love for gadgetry and the spy culture in general. However, it was used only once more during his tenure, with Bessie remaining the Doctor's chief road vehicle of choice.

Barry Letts was keen to capitalise on the success of the Drashig puppets employed in Carnival of Monsters. Whereas the Drashigs had been built by the BBC Visual Effects Department, the unit had ultimately determined that its resources were insufficient to build the dinosaurs required for the model work. Instead, it was suggested that the Doctor Who production team outsource the work to Cliff Culley and his firm, Westbury Design and Optical, who had recently worked on Planet of the Daleks. However, the dinosaurs exceeded Culley's capacity, and so he subcontracted the models to Rodney Fuller. Letts was very disappointed with the results, which were far less maneuverable and convincing than the Drashigs had been. Because the dinosaurs were such an important element of the story, however, their flaws could not be minimised on-screen, leaving Paddy Russell and her team to make do with what they had. Fuller's company apparently went out of business soon thereafter.

Note: Part one of this six-part story bears the on-screen title Invasion, while parts two to six are Invasion of the Dinosaurs.

The Third Doctor and Sarah arrive in 1970s London to find it has been evacuated because dinosaurs have appeared mysteriously. As the line between friends and enemies wavers, the Doctor soon discovers the dinosaurs are being brought to London via a time machine to further a plan to revert Earth back to a pre-technological "Golden Age"...

The Doctor and Sarah Jane Smith arrive in a deserted London plagued by looters and lawlessness. UNIT is helping maintain martial law. The regular army, headed by General Finch, has evacuated the city and issued orders to shoot looters on sight. the Brigadier disagrees, since it means shooting civilians. The Doctor and Sarah encounter several looters and, surprisingly, a pterodactyl. The two are then arrested on suspicion of being looters. The Doctor is designated as Prisoner 177781 and Sarah Jane Smith is designated as Prisoner 177782 and are sentenced to be incarcerated in a detention centre.

Outside, a tyrannosaurus rex destroys a building and traps some soldiers. They manage to drive it off. At the school serving as UNIT HQ, the Brigadier and Benton discuss the interference problems with their communications and look at the latest pictures of looters, which include the Doctor and Sarah.

The Doctor and Sarah escape but are caught by soldiers. They are loaded into the back of a Land Rover to be taken to the detention centre. The Land Rover encounters a tyrannosaurus rex.

While the soldiers fight the tyrannosaurus, the Doctor and Sarah escape and hide in a garage. They find a medieval peasant from the days of King John already there who, believing the Doctor to be a wizard who has put a spell on him, attacks the Time Lord with a knife before disappearing in a time eddy. Soldiers search the area and the Brigadier enters the garage.

Back at UNIT HQ, the Brigadier explains the situation to the Doctor. Dinosaurs appear and disappear, the city has been evacuated, and looters run rampant. The Doctor is introduced to Finch, who is in charge of the operation. Finch doesn't think the Doctor will be much help, but rather finds his ideas unrealistic. Sarah talks with Mike Yates, who needed some time off after the experience with the giant maggots.

A stegosaurus has been trapped, and the Doctor wants it taken alive. However, it disappears in a time eddy that makes time run backwards. The people affected would not remember it happening. The Doctor suspects someone is deliberately bringing the dinosaurs to London — and in a hidden laboratory a pair of scientists, Butler and Professor Whitaker, are operating the time technology causing the situation.

They are aided by Mike Yates, who feels the Doctor could help them achieve Operation Golden Age, but Whitaker is unconvinced. He tells Mike to sabotage the stun gun the Doctor is building to use on the dinosaurs.

The Doctor falls, dropping the gun, which Yates picks up. He undoes his sabotage and fires at the tyrannosaurus. The creature is captured and brought back to a hangar.

Yates is angry at Butler and Whitaker for trying to kill the Doctor but agrees to perform further acts of sabotage — specifically against the machinery being used to record from where the dinosaur appearances are controlled.

Sarah has been doing some research into time travel and mentions Whitaker. The Brigadier remembers the name, and the Doctor wants to check up on him.

The tyrannosaurus is freed by Finch, who breaks its chains. Sarah is attempting to take pictures of it when it awakes and moves to attack her. She finds the door has been locked from the outside. Before the dinosaur can get to Sarah, the Doctor finds and rescues her, though she is slightly injured.   She then sets off to gather her own evidence. Sarah meets with Sir Charles Grover, an ecologist MP who is acting Minister with Special Responsibilities in London. He drugs her. When she wakes up, she is astounded to find herself on a vast spaceship.

The crew of the ship includes Mark, Adam and Ruth, minor British celebrities who have adopted new aliases and lives. They tell her they are en route to a New Earth where mankind can begin again, closer to nature. They left Earth three months earlier; the ship is one of a fleet carrying over two hundred people to a new life. Sarah is committed to the re-education programme to enable her to think like them.

The Doctor searches London in his new vehicle, the Whomobile. Under Moorgate Station, he finds the base used by Whitaker and Butler but is scared away when they use a pterodactyl to defend it. He returns with the Brigadier, but all signs of occupation have been removed. Operation Golden Age is revealed to be a broad conspiracy including Whitaker, Butler, Yates, Grover and Finch as its core coordinators. They have emptied London to revert it to a more natural state, after which the people on the spaceships — which are actually vast bunkers — will be allowed out to repopulate a clean and free planet. Whitaker also works out how to reverse time, so soon humanity, apart from their own chosen specimens, will never have existed.

Finch tries to frame the Doctor, who he knows will not support their plans. He brings the Brigadier to the Doctor, catching him in the act as a new time eddy starts up.

The Doctor soon twigs that an over-zealous Yates is the UNIT mole. Sergeant Benton lets the Doctor escape, for which Finch threatens a court martial. The Doctor uses his freedom to track down more monsters, but when he is recaptured, the Brigadier asserts his authority and takes the Doctor into UNIT custody rather than the regular army's.

Meanwhile, Sarah has escaped from the fake spaceship. She has learnt its true nature. She is caught by Finch, who returns her to Whitaker's custody. While she is away, Mark works out that the ship is a fake and tells the other passengers, but he is not believed. When Sarah is returned to the ship, Mark and she use the fake airlock to convince Ruth and the others of the deception.

The Doctor encounters another time eddy and is faced by more dinosaurs.

The dinosaurs start fighting each other. Finch arrives and tries to take the Doctor, but Benton and the Brigadier arrive as well and take the Doctor away.

The Brigadier decides to contact UNIT H.Q. in Geneva to ask them to put pressure on the government, and Benton begins to arrange the call. However, shortly afterward, Yates arrives and holds the Doctor, Benton and the Brigadier at gunpoint. After Yates cancels the call to Geneva, he reveals the nature of Operation Golden Age's plans. Fortunately, Yates is distracted when Private Bryson enters with a tea tray and offers the Captain a cup, giving Benton the opportunity to overpower and disarm Yates.

Sarah is able to convince the occupants of the fake spaceship that they have been duped by opening the airlock. They confront Whitaker and Grover and demand an explanation. Grover attempts to placate them, but the Doctor and the Brigadier arrive. Whitaker breaks free of his captor and pulls the lever, activating the reversal process. A Time Lord immunity allows the Doctor to resist this and stop the machine. He then reverses the polarity, but Grover does not recognise this and pulls the switch himself. Whitaker tries to stop him, and they and the machine vanish — transported back in time to their "Golden Age", wherever and whenever that is. The Doctor says he hopes they'll be happy there.

Back at UNIT H.Q., the Brigadier confirms that the crisis is over, but there are still human casualties to deal with. Finch will be court-martialed. Yates is offered the chance to resign and given extended sick leave. The Doctor reflects that people like Grover may have had good motivations in wanting to fight pollution and environmental degradation, but they took their schemes too far and endangered all mankind and its civilisation. He decides it is time for a holiday and offers to take Sarah Jane to the beautiful planet of Florana. 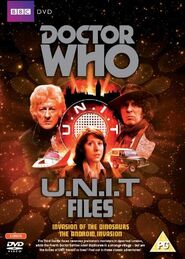