Incursions was a full cast audio anthology released on 30 April 2019 by Big Finish Productions, and the eighth release of UNIT: The New Series.

8.1 This Sleep of Death by Jonathan Morris

Abbey Marston. UNIT's dark secret. A place where the laws of space and time, life and death, can be suspended. Where remembering the departed has consequences... When UNIT faces a threat from a dead man, Kate has no choice but to return to Abbey Marston once more, to disturb the sleep of death. But the Static are waiting...

When the planet's weather systems start behaving strangely, Osgood is worried. Soon, she and Sam Bishop are heading to a remote Scottish island where an eccentric old woman speaks to the wind itself.

Meanwhile, Kate Stewart visits a deep-sea oil-rig where strange things are afoot. A tempest is coming, and it could be disaster for the entire world.

8.3 The Power of River Song part 1 by Guy Adams

UNIT has been assigned to monitor the switch-on of a revolutionary new power system – they know from experience such things can be tricky.

Nearby, Osgood and Lieutenant Bishop investigate mysterious disappearances – and appearances of trans-temporal phenomena. Kate would like to ask the Director some questions, but she's proving strangely elusive...until there's a murder.

8.4 The Power of River Song part 2 by Guy Adams

There's a dead body in the power station. River Song is the prime suspect. And Kate is most concerned by the identity of the victim.

Meanwhile, Sam and Jacqui chase Vikings, while Osgood finds herself out of time. As deadly predators focus their attention on Earth, it seems activating the power of River Song could spell the end of everything... 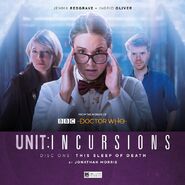 This Sleep of Death 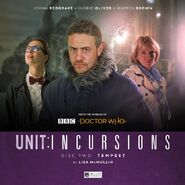 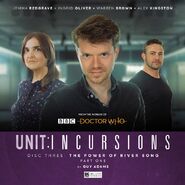 The Power of River Song part one 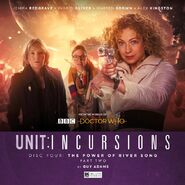