Illegal Alien was the fifth novel in the BBC Past Doctor Adventures series. It was written by Mike Tucker and Robert Perry, released 6 October 1997 and featured the Seventh Doctor and Ace.

Notably, it was originally a television story that would have been part of Season 27 of Sylvester McCoy's era of Doctor Who.[1]

Britain is at war. Night after night the Luftwaffe are bombing London. A serial killer dubbed the Limehouse Lurker is stalking the rubble-strewn streets. But a deadlier threat falls from the sky in the shape of a sinister silver sphere...

Cody McBride, ex-pat American private eye, sees the sphere crash-land and split open — and glimpses something emerging from within. But the military dismiss his account of events — the sphere is simply a new German secret weapon that has malfunctioned in some way. What else could it be?

Arriving amid the chaos, the Doctor and Ace are the only people to believe McBride. The sphere bears all the hallmarks of sophisticated alien technology — and whatever was inside it is now loose in London.

Before long, they have embarked on a trail that brings them face to face with hidden Nazi operatives — and some very old enemies...

The Blitz is at its height. As the Luftwaffe bomb London, Cody McBride, ex-pat American private eye, sees a sinister silver sphere crash-land. He glimpses something emerging from within. The military dismiss his account of events — the sphere must be a new German secret weapon that has malfunctioned in some way. What else could it be?

Arriving amid the chaos, the Doctor and Ace embark on a trail that brings them face to face with hidden Nazi agents, and encounter some very old enemies.

Cody McBride, a private detective, witnesses a large metallic sphere fall from the sky. He investigates and falls unconscious. Later, the Doctor and Ace approach McBride about an article that ran in 'tomorrow's' newspaper.

London is being terrorised by a serial killer known as the 'Limehouse Lurker', a terror who brutally 'squishes' their victims. McBride gathers evidence from underworld contacts he has, notably former military intelligence man George Limb. The Doctor assumes the Lurker to be a time-travelling Cyberman that has been damaged by a bomb from the Blitz and is seeking blood plasma to heal it's damaged organic components.

McBride and the Doctor investigate the factory of Dr Peddler, a murdered businessman, where they discover a covert operation to improve the effectiveness of British foot soldiers using captured cybertechnology.

Out on her own investigations, Ace fends off a Cybermat attack at a bar and takes shelter at George Limb's house. Ace discovers Limb has been sheltering the Lurker and it attacks her. Captain Hartmann, a Nazi officer, turns up and destroys the Lurker but kidnaps Ace and takes her to his Nazi base in Jersey.

George Limb is revealed to be the mastermind of the cyber-operation, having given cybertechnology to both the British and the Nazis to kick-start a technology race. The Doctor recovers the Lurker's cyber command unit, a mobile computer that directs the Cybermen. He travels to Jersey and uses the command unit to seize control of the Cybermen and sets them against Limb and his Nazi allies.

A Nazi captain damages the control unit, all hell breaks loose and the Cybermen can no longer be controlled. Limb flees using the Cybermen's time capsule, however the primitive device can't cope and time is slowed down. The Doctor is able to resist the effect and pulls Ace free. They both escape. The cyber control unit explodes and destroys the factory on Jersey. The Doctor assumes Limb to have been shredded through time and space, dead.

The Doctor and Ace leave, not knowing that McBride has found hundreds of Cybermen cocoons underneath London. 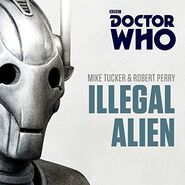