Hunter's Moon was the forty-fifth novel in the BBC New Series Adventures series. It was written by Paul Finch and featured the Eleventh Doctor, Amy Pond and Rory Williams.

"There's no end to the horror in this place — it's like Hell, and there are devils round every corner."

Welcome to Leisure Platform 9 — a place where gamblers and villains rub shoulders with socialites and celebrities. Don't cheat at the games tables, and be careful who you beat. The prize for winning the wrong game is to take part in another, as Rory is about to discover — and the next game could be the death of him.

When Rory is kidnapped by the brutal crime lord Xorg Krauzzen, the Doctor and Amy must go undercover to infiltrate the deadly contest being played out in the ruins of Gorgoror. But how long before Krauzzen realises the Doctor isn't a vicious mercenary and discovers what Amy is up to? It's only a matter of time. And time is the one thing Rory and the other fugitives on Gorgoror don't have.

They are the hunted in a game that can only end in death, and time for everyone is running out... 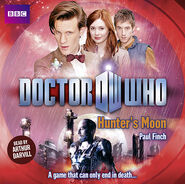