Galaxy Four was a novelisation based on the 1965 television serial Galaxy 4.

Following a skirmish in deep space, two alien spacecraft have crash landed on a barren planet in Galaxy Four.

The Drahvins are a race of beautiful females, led by the imperious Maaga. The Rills are hideous tusked monstrosities, accompanied by their robotic servants, the Chumblies.

When the Doctor arrives, he discovers that the planet will explode in two days' time. The Drahvins desperately ask for his help in escaping the planet and the belligerent Rills.

But things are not always as they seem...

This Target Book was released as an audiobook on 6 July 2017 complete and unabridged by BBC Audio and read by Maureen O'Brien. 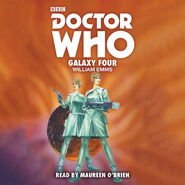