Fury from the Deep (novelisation)

Fury from the Deep

Fury from the Deep

You may be looking for the episode of Doctor Who that exists within the DWU.

In the dark uncharted depths of the North Sea it has lurked, growing in strength, growing in size, and striking terror into the hearts of mariners down the untold centuries.

Landing near a North Sea gas refinery off the east coast of England, the TARDIS crew are immediately accused of sabotage. Several rig crews have mysteriously vanished, strange pressure build-ups have been detected, and in the refinery's pipelines the Doctor can hear the steady, rhythmic beat of - what?

Soon the Doctor, Jamie and Victoria will find themselves at the unrelenting mercy of the deadliest and most terrifying foe they have ever encountered...

This Target Book was released as an audiobook on 7 July 2011 (brought forward from the originally scheduled release date - 4 August 2011[1]) complete and unabridged by BBC Audio and read by David Troughton. 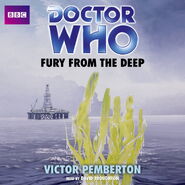