26 (given to later editions)

Full Circle was a novelisation based on the 1980 television serial Full Circle.

Romana has been recalled to Gallifrey by the Time Lords – a summons that cannot be ignored, despite her extreme reluctance to give up the freedom and excitement life as the Doctor's companion has brought.

The time traveller's course is set, the flight path is clear, estimated time of arrival on Gallifrey is in thirty-two minutes – then the unexpected happens...

The full significance of their temporary loss of control over the TARDIS is only gradually brought home to the Doctor. For it is not on Gallifrey that they land but on the terror planet Alzarius, and at a time when the legendary Mistfall comes again – when the giant scaly creatures that inhabit the planet's swamps leave the marshes and go on the rampage, leaving a trail of death and destruction in their wake...

This Target Book was released as an audiobook on 29 January 2015 complete and unabridged by BBC Audio and read by Matthew Waterhouse with K9's voice by John Leeson. 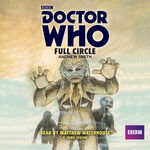