Frontios was a novelisation based on the 1984 television serial Frontios.

The TARDIS has drifted far into the future and comes to rest hovering over Frontios, refuge of one group of survivors from Earth who have escaped the disintegration of their home planet.

The Doctor is reluctant to land on Frontios, as he does not wish to intervene in a moment of historical crisis – the colonists are still struggling to establish themselves and their continued existence hangs in the balance.

But the TARDIS is forced down by what appears to be a meteorite storm, and crash-lands, leaving the Doctor and his companions marooned on the hope-forsaken planet...

"It was a repellent sight - a huge and hideous assembly of parts of human bodies, shaped something in the form of a giant Tractator. White bones tipped with metal cutters scraped against the rock, while rotting hands polished the surface smooth. Through illuminated windows in the body Tegan glimpsed more mechanically gesticulating human arms and legs in an advanced state of decay. It was a machine built from the dead."

A human pilot is still required to drive the machine. This scenario does lend a little more credence as to why Turlough had envisioned the Tractators as "Evil"

There were two audiobooks of this story produced: whilst Beth Chalmers did a reading for the RNIB in March 2010 this release is only available to the registered blind. The story was released again on 16 April 2015 complete and unabridged by BBC Audio and read by the author Christopher H. Bidmead.

The 2015 audiobook version was reissued as part of The Second Monsters Collection on 28 January 2021. 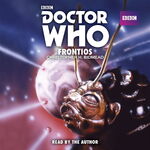 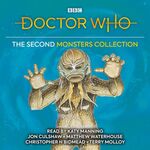