77 (shown inside only, not on spine or cover)

When the TARDIS happens to materialise on an alien space craft, the commander of the ship, the reptilian Monarch, invites the Doctor and his companions to continue their journey to Earth in his company.

Monarch's hospitality even extends to a generous offer to liberate the time-travellers from the shortcomings of their bodies and replicate them as androids-so much more practical.

Although Adric finds this proposal extremely attractive, the Doctor has good reason to be suspicious of Monarch's motives...

'HEAVEN. HE SAYS WE'RE ALL GOING TO HEAVEN.'

On its way to Earth the TARDIS unexpectedly materializes on an alien spaceship, The occupants invite the Doctor and his companions to accompany them to Earth; but their hospitality is not all it seems...

On board are people from all eras of Earth's history and the aim of the Urbankans and their reptile leader, Monarch, is to colonize Earth. Three billion minds are aboard the ship, three billion memories awaiting new, android bodies that will enable them to escape their own dead planet and live forever...

Doctor Who - Four to Doomsday, featuring Peter Davison as the Doctor, was written by Terence Dudley; this adaptation is by Terrance Dicks, who for five years was script editor of the series and who has written more than sixty novelizations of Doctor Who television stories.

This Target Book was released as an audiobook on 2 March 2017 complete and unabridged by BBC Audio and read by Matthew Waterhouse. 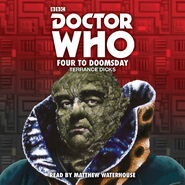