Forever Autumn was the sixteenth novel in the BBC New Series Adventures series. It was written by Mark Morris and featured the Tenth Doctor and Martha Jones.

It is almost Halloween in the sleepy New England town of Blackwood Falls. Autumn leaves litter lawns and sidewalks, paper skeletons hang in windows, and carved pumpkins leer from stoops and front porches. The Doctor and Martha soon discover that something long-dormant has awoken in the town, and this will be no ordinary Halloween. What is the secret of the ancient chestnut tree and the mysterious book discovered tangled in its roots? What rises from the local churchyard in the dead of night, sealing up the lips of the only witness? And why are the harmless trappings of Halloween suddenly taking on a creepy new life of their own? As nightmarish creatures prowl the streets, the Doctor and Martha must battle to prevent both the townspeople and themselves from suffering a grisly fate... 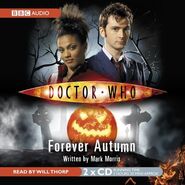