#FindTheDoctor was an Alternate Reality Game (ARG, for short) that began releasing content in late 2021 as a promotion for the forthcoming Doctor Who: Flux. The ultimate goal was to determine the password to a hidden page on the official Doctor Who website. Each clue held a single letter that was highlighted in some way, as well as a hint towards finding the next clue.[1]

Clue content was a mixture of online and real-world items, though the real-world items had some online form of record - presumably to aid fans who could not travel to them.

Some highlighted letters were not clues at all, but in those instances, they were given in larger numbers and represented coded messages that would lead to the next clue.

Unusual to the rest of the ARG, the last clue contained 3 letters, rather than 1.

The reward for completing the ARG would be unveiled by typing the found letters into the password box on the /mystery page on the Doctor Who website. The prize was the webcast A Message from the Doctor, which could be found unlisted on YouTube, and an official promotional image of the Thirteenth Doctor.

As a follow-up, the BBC released a statement video from Jodie Whittaker on 24 September 2021 thanking all the fans for getting involved in the adventure, #FindTheDoctor. She further revealed that there would be much more Series 13 news in the coming days up to the actual broadcast of it.[14] 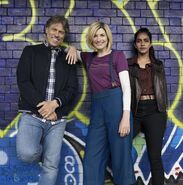 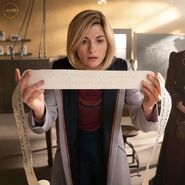 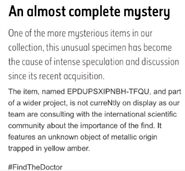 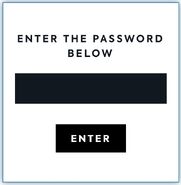 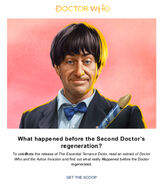 Newsletter: B and H 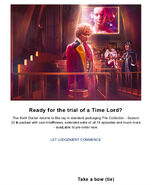 Newsletter: I, R and L 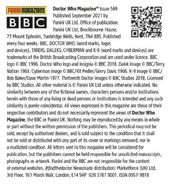 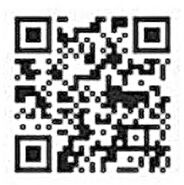 On mobile devices, the "/mystery"-page was also found to contain a hidden instance of the word "FRED", which was almost the nickname the Fourth Doctor gave Romanadvoratrelundar. Curiously, the "Inspect Element" password for the page is "X4G6H66TZ114Z33H19K6", which holds the exact amount of letters as the Time Lord's full name.[15] These were originally thought to have part in the final password, but were eventually disregarded, with the former just being random and the latter just being a a placeholder for the final password, which was found when putting the list of clues together and was much shorter.

User "John Smith" who left the picture on Google Maps also has 5-star reviews for all the following buildings published on 16 August 2021, referencing events of the series (the profile indicates that 4 more reviews were posted, but as they do not show up, they are presumably deleted). In chronological order, they are:

Shazam was asked to have the music used in A Message titled "mystery complETE" and use the logo from the Series 13 trailer, but it is actually "Scorched Ground 6" released in 2015 and has a YouTube link to "Lost Prophecies" by the same artist, released on Youtube on 17 June 2012, which was used as the music for The Enemy of the World trailer released on 10 October 2013.

Even though the quest was originally meant to be completed on 16 September 2021, the last clue containing the letters ETE wasn't discovered until much later than intended, but still the final password was accidentally completed by fans who, by chance, looked in the public source code for the web page "/mystery" which had changed the regex "X4G6H66TZ114Z33H19K6" into "DC5EGYVANVETE", revealing the password.[16]