Tardis
Register
Don't have an account?
Sign In
Advertisement
in: 2017 novels, Novels set on Hyspero, Stories set in England,
and 3 more

Fellowship of Ink was a 2017 novel by Paul Magrs.

It was a spin-off from the acclaimed Brenda and Effie Mysteries series, and it also had a degree of focus on characters first introduced in his 2002 BBC Eighth Doctor Adventures novel Mad Dogs and Englishmen. With Hyspero and the Scarlet Guard playing a part in the narrative and Valcea getting a brief mention, it had connections to all three BBC Eighth Doctor Adventures novels written by Magrs, as well as the Iris Wildthyme series.

Not unlike Magrs previous stories published by Snowbooks Ltd - Enter Wildthyme, Wildthyme Beyond!, and From Wildthyme with Love - this novel had deep ties to other series, such as the aforementioned Brenda and Effie series.

The Smudgelings... Professors Reginald Tyler and Henry Cleavis and their various literary friends… little did they know as they gathered on Sunday evenings by the fire to drink sherry and read out chapters from their ongoing fantasy novels that they were wearing thin the fabric of space and time. All around them in the magical, northern university town of Darkholmes there were Holes opening up to other dimensions…

Here we are in the 1930s, in the leafy lanes and lofty towers of an ancient town… where there are witches, demons and gargoyles mixed up with dons and their frustrated wives and handsome boyfriends. And, most mysteriously of all, there is Brenda, the rather strange housemaid to the Tyler household, who is here incognito, for reasons all of her own…

Henry Cleavis and his student John - masquerading as brothers - arrive in Darkholmes to take up their new positions at Hexford College as Professor and Porter respectively. Shortly after their arrival Henry finds himself accosted by a fawn-like creature and begins to suspect that something is afoot in the town. However, John dismisses Henry's encounter and suspects that the professor is going senile. The pair are not given a warm welcome by most of the other professors, although Reginald Tyler reaches out to Henry and invites him to a soiree at his home on 199 Steps Lane.

During the party Reginald and Henry head upstairs where they begin discussing their writings and Reginald invites Henry to join his society known as the Smudgelings. Following the event Henry and John returned to their domitary to discover Mr. Mack had broken in and was rummaging through the Professor's manuscripts. After a short fight John managed to stake Mack - who had transformed into a giant bat-like creature that Henry identified as a Gyregoyle - but ended up being dropped from a height after Mack dragged him through the air as he fled off into the night.

This novel was released as a digital-only audiobook on 5 May 2021 complete and unabridged as part of the Iris Wildthyme and Friends series by Big Finish Productions and read by Louise Jameson. 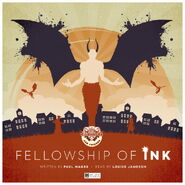