Babylon, Mesopotamia, May to June 323 BC

You may wish to consult Farewell Great Macedon for other, similarly-named pages.

Farewell, Great Macedon was a 2010 audio adaptation of a 1964 Doctor Who unproduced story Farewell Great Macedon.

The TARDIS materialises in the Hanging Gardens of Babylon, one of the Seven Ancient Wonders of the World, in the year 323 BC. The Doctor, Ian, Barbara and Susan meet Alexander the Great – but their excitement is tempered by the realisation that these are the final days of Alexander's life. As the travellers become embroiled in the tragic events, the inevitability of history unfolds around them.

But can they – and should they – change it?

The Hanging Gardens of Babylon (1)[]

The TARDIS stops suddenly to everyone's surprise, even to the Doctor's. Dismayed, they notice the panel lights of the TARDIS shutting off. The TARDIS has a fuel leak. Realising they are on Earth and sometime in the past, and with no way to repair the TARDIS presently; The Doctor, Ian, Barbara and Susan decide to step outside of the ship to investigate the "heavenly" sound just outside. Outside they find themselves in a wooded glade; in a garden full of sound and beautiful exotic plants. Very shortly after exiting, Ian realises that they must be in the Hanging Garden of Babylon, one of the seven ancient wonders of the world. The sound coming from the plants is actually produced by thin instrument strings tied around the stalks of the plants that produce sound when a breeze passes through. Shortly after, they hear the fanfare sound and the voices of beautiful women announcing that the king has arrived. They find themselves chasing after Susan who has run off to see where the women are going, to see the king.

In another part of the gardens, in a secluded arbour, four men are found drinking wine together. Seleucus, described as a giant of a man and a general of the Greek army; Glaucias, a stocky, elderly man and the camp physician; Iollas, a young man no more than twenty, a priest of the god Apollo; are being addressed by the fourth among them, Antipater, an old man of more than seventy, a politician and a trusted adviser to the king. In a speech to his audience Antipater makes known his distress for having been in a foreign land the last thirteen years and his longing to go back to his homeland. Claiming that not one Greek wouldn't welcome the thought of going back to Thessaly. Argued by Seleucus that the army would never abandon the king, Antipater declares that the king will have to be separated from the army. Longing to live a life on his own terms, Antipater with the approval of Iollas and Glaucias, deploys a plan to kill the king of Babylon whom the army and people believe to be a god himself. Seleucus, who believes this to be treason attempts to leave before being reprimanded by Antipater who reminds him of his plot not too long before in which Seleucus tried to place himself in the order of succession to the throne awaiting the kings death after the king had been badly wounded, Seleucus stays to hear him out. Antipater believes that, currently, there would be nothing to gain from the death of the king because one of his three generals would take the throne; Antipater suggests that they kill all three generals along with the king in order to better control the throne. Raising the concern of the men he was speaking to, Anitpater quells their worry by delivering his plan. Four medallions, which signify succession to the throne, and a final fifth medallion, meant for Seleucus. Who, should the plan work, would be sole successor to the throne upon the death of the three generals and the king. Seleucus, already trying to leave again is drawn by the fifth medallion presented to him by Antipater, who promises him the medallion should he agree to help with his plan for murder. Seleucus, unsure, leaves on the promise that he would decide at a later time. With Seleucus gone, Antipater discloses to Iollas and Glaucias that the Greek general would be nothing more than a figure head so that they could go after the treasure and riches of the empire which they would get by blackmailing Seleucus. With four deaths to plan for, Antipater adjourns the secret meeting, believing that between the four of them and their positions of influence, they should be able to devise something. Antipater decides that they will work their way up to the kings death starting with the death of the generals, and to better prepare the situation he orders Iollas, the prophet of Apollos to "prophecy" something terrible.

Susan who had followed the singing women out of the hanging gardens, has made her way up to great towering city walls of Babylon. When the Doctor, Ian, and Barbara finally catch up to her they manage a glimpse of the tents outside of the city where the soldiers in the army reside. In the distance they can see the king waiting to greet the women who then greeted him with gifts. Barbara, realising just where they are at, tells her fellow travellers just why the army camps outside of the Ishtar gate. Losing the attention of the Doctor shortly thereafter to a curious smell which he begins to investigate the location of its origin. Catching up with the Doctor and the source of the smell, the travellers find Iollas performing a ritual, though the travellers believed him to cooking. The Doctor even going so far as to try and teach him how to cook better. Though it isn't long before Ian and the Doctor are interrupted by a spear landing just between the two. Turning to see who threw the spear, they see a young man of about thirty. It is the king, accompanied by four massive guards equipped with short spears and dressed as generals ready to retaliate against the Doctor and Ian. Half joking, the king tells them that they must not disturb Apollo's priest referring to Iollas who is bent over on the ground mumbling now, seemingly back in some trance, warning them of unspoken nightmares that could come from interrupting his prophesying. The Doctor and Ian admit that they believed him to be cooking. Iollas comes out of his trance and prophesies a warning that the king must leave Babylon before a four-headed misfortune descends upon him. The king, ignoring Iollas' words in another half joking manner, merits a praise from the Doctor for not believing in such foolish things, although the king scolds him in return for not respecting the customs of his people. As the king and the Doctor become more friendly to each other, the king offers to host the travellers, while completely ignoring Iollas' attempt to warn him with his "prophecy". As the young king leads them away from Iollas, he introduces them to his generals Haphaeston, Cleitus, Calanus, and Ptolemy, who the largest of all of them. As the young king leads the travellers to the camp, Barbara begins to figure just who he is. As Barbara and Susan speak to Calanus, the king reveals himself to be none other than Alexander of Macedon.

At the edge of the encampment near the walls, in a beautifully decorated tent Antipater and Glaucias sit drinking wine when Iollas enters. Seeing his anger Antipater questions him to find out that the king had ignored his prophecy. Antipater, unconcerned, knew all along the king would not listen to Iollas' words. Learning of the strangers who interfered with Iollas, Antipater conjectures that this actually helps their cause. Four strangers, four omens, four deaths. Now they could carry out their scheme and have someone to take the fall. Claiming that they can easily link the deaths to the strangers by making others believe that these strangers are the evil omens and that the suspicion will fall on them by default. The strangers will take the blame and no one will suspect foul play. Antipater states that soon the kings camps will be in a panic, and that death and panic go hand in hand. 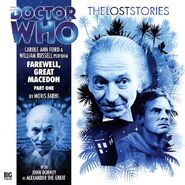 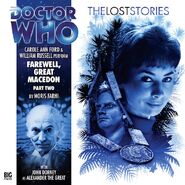 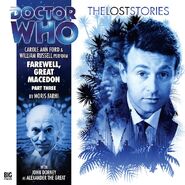 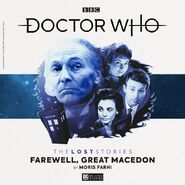 Revised cover, with the 2018 Doctor Who logo